Home DNA Discoveries DNA tests for genealogy – what do we learn? Y-DNA

The counterpart of mtDNA for the patrilineal line is Y-DNA, which is passed on from father to son, virtually unchanged, generation after generation. However, changes do occur with some regularity, and these produced the various haplogroups shown above and subsequently, their subclades (another word for subgroup). In contrast to mtDNA tests, only men can take Y-DNA tests since men do not pass a Y-chromosome to their daughters. This means that women will need to find fathers, brothers, uncles or male cousins who share their surname in order to test.

How does this work?

In contrast to atDNA tests, Y-DNA tests commonly look at genetic markers consisting of segments containing sequences of repeating nucleotides or “short tandem repeats” (STRs). These markers are assigned a DYS number (DNA Y-chromosome Segment number). The number of repeats that are counted at a particular DYS is called the allele. Below is an example of how results are reported:

The combination of results for all of the tested markers is what defines the haplotype. This in turn gives a probable haplogroup. The haplogroup can be confirmed by testing specific SNPs (single-nucleotide polymorphisms), but that will be the subject of a future post. Haplogroups can be traced back to a theoretical “Adam” in Africa, and so the rough migratory path of the patrilineal ancestors can be followed in both location and time as shown in the image at the top of this page.

Once results are in, these are compared to others within the test-company’s base or within a particular surname project, and a genetic distance to a most recent common ancestor (MRCA) can be estimated by counting the differences in allele values between two people (more on this later).

Y-DNA tests are unfortunately more costly than atDNA tests. The costs and resulting accuracy vary according to the number of STRs tested, starting at 37 and going to 111 markers at the moment. It is often possible to start with a the least costly 37-marker test and upgrade in the future without sending an additional sample.

So far, the only Y-DNA result we have is for the McCullough paternal line, and this brought a surprise. On the FTDNA McCullough Project page, we are classified as R1b1a1a2 and/or R1b – lineage V.  R-M269 or R1b1a2 is the most common subclade of R-M343 (R1b), which is itself the most common Y-DNA haplogroup in Western Europe. This haplogroup is believed to have originated about 9,500 years ago in the region of the Black Sea, and then spread to Europe very soon thereafter. 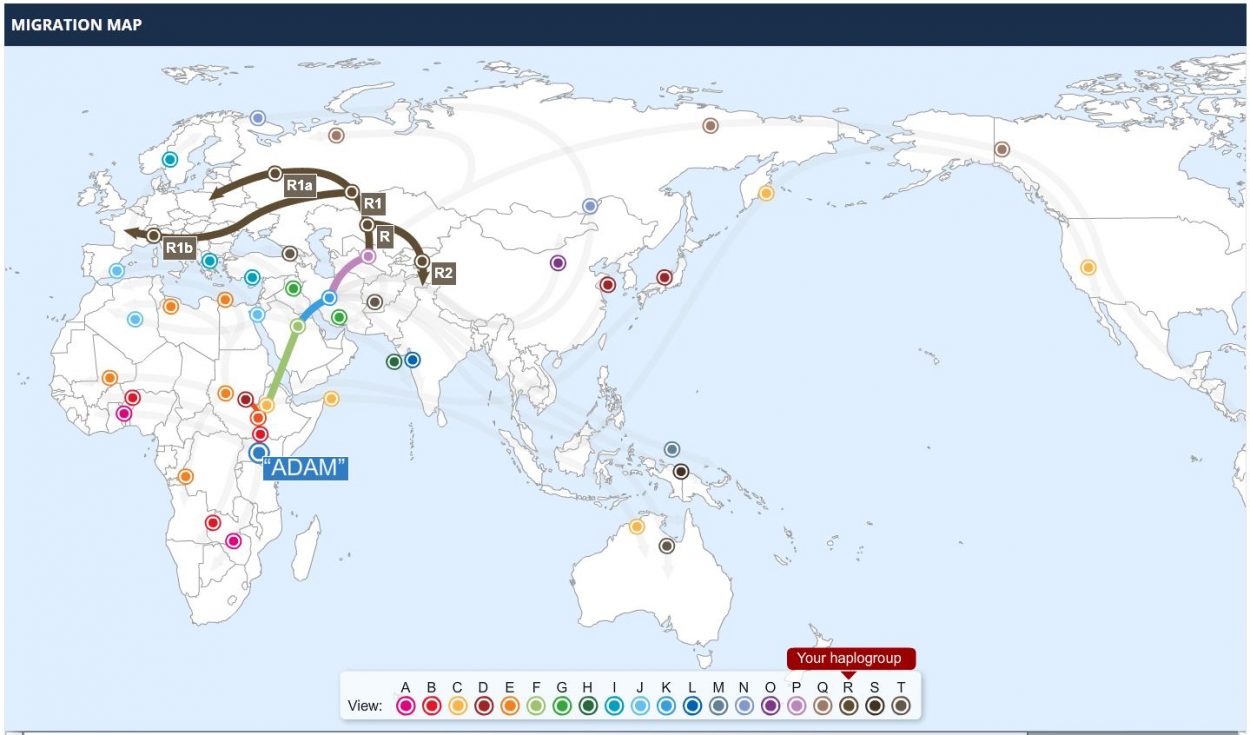 Migration route out of Africa to Europe for haplogroup R1b.

Frequency of Haplogroup R in Europe in general. 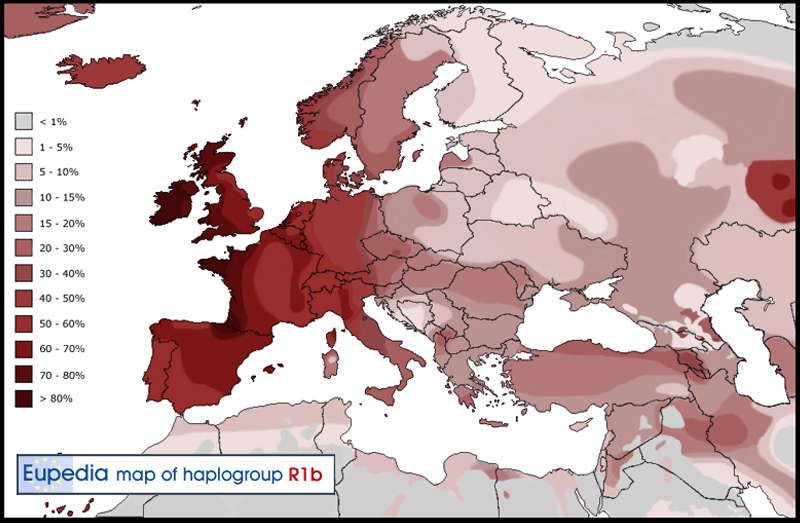 Map showing locations where Haplogroup R1b is found in Europe.

It appears that our branch of the McCulloughs is in a small subgroup who have more close ties with people named McCracken than McCullough. At this point, there are “only” three McCulloughs in this haplo-subgroup and many McCrackens plus one or two other surnames. Our connection probably lies well before James McCullough, our most distant known McCullough direct paternal ancestor in America. However, the fact that there are three genetically-related McCulloughs whose most recent common ancestor was probably born between 1650 and 1750, indicates that there was some sort of “event” with that ancestor. This probably occurred in the early days of surnames and well before the family immigrated to America. It could be a case of a McCullough being adopted by a McCracken, a McCullough marrying into a McCracken family with no heirs and taking the name, a case of infidelity – or even that when more McCulloughs are tested, we will discover another origin for this group.

At this point, I have found no other McCulloughs from our branch besides ourselves who have done a Y-test. For this reason, it would be very useful if any other males of our line who still carry the McCullough surname (= patrilineal McCullough-surname descendants of Sheridan McCullough) would do this test!!!

A good place to look for Y-tests is FTDNA (we have no connection with this company – it is just one of the very few offering Y-DNA tests instead of autosomal). The header migration map is from FTDNA.