The first McCullough ancestor for whom we have (undisputed) records is William McCullough, born about 1763, either in the Philadelphia or York, PA area. We are 99+% certain that he was the son of James McCullough, of Fawn Township, York County, Pennsylvania but there has been considerable confusion on this issue over the years.

The story according to Sheridan McCullough’s children 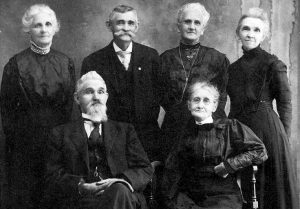 According to an article about the descendants of Sheridan McCullough, published in the Clarion Democrat, (Clarion, Pennsylvania, vol. LXXII, No. 12, November 2, 1911), the first of our McCullough family in America was Hugh McCullough, who arrived around 1748. This article was the result of the collective memory of several of Sheridan McCullough’s children, who were all around 80 years old at the time. Still, one would expect that they knew something about their grandfather and great-grandfather.

According to the story, William McCullough, born about 1763, was the son of Hugh McCullough, who immigrated from Northern Ireland between 1748 – 1750 and settled in Maryland, where William was born.  William had at least two older brothers, John and Archibald, and a sister Mary/Polly, who married John Hull.

Unfortunately, other than the mention of Hugh in this article, I have never found any other references to a Hugh McCullough – or Archibald – that could be linked directly to our family. There were Hugh McCulloughs and also a James Hugh in the Philadelphia area and even in the Baltimore area at about the right time. However, from their wills and other information gleaned a decade or so ago, no connection to William could be found. In addition, from what we know of the Mary McCullough who married John Hull, she was born between 1794 – 1795, when William would have been 30 and his supposed older brothers closer to 40. This is highly unlikely unless Hugh had had two different wives. No wife’s name is ever mentioned.

However, if James is the correct great-grandfather, he would have died long before any of these people were born and 13 years before even Sheridan McCullough was born. This would probably also be true for a Hugh McCullough unless he immigrated as a young child with his parents. Grandfather William died when the oldest of his grandchildren/Sheridan’s children was 12 and the youngest, including three of those pictured in the article and here, were not even born. This means that their information probably came from Sheridan and their mother Mary Ross, who herself had died 45 years before the article was written. Since even Sheridan had been dead for over 20 years at the time of the article, this information was very “old news” that could have well become garbled over the intervening decades.

Putting aside possible journalistic errors, we also know the the story of the children being direct descendants of Betsey Ross was a fable, although in that case, the motivation to make up a good story is more clear.  Now that more records are available on-line, it is worth revisiting the question in a future post. For now, our working theory is that Hugh was not William’s father, although another connection such as uncle or perhaps grandfather may someday be found.

The story according to the descendants of Mary McCullough Hull 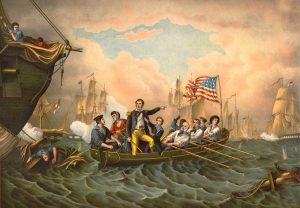 Although the Hugh tradition is fairly strong in the various branches of the family who descend from Sheridan (probably based on this article), recently acquired information from the Hull family suggests that William McCullough’s father was James McCullough, not Hugh, and that the Mary McCullough mentioned in the Clarion article as a sister of William’s was in fact his daughter, perhaps by an unknown first wife.

Hugh supposedly settled near Baltimore, Maryland, while James McCullough settled in Fawn Township, York, Co., near border with Harford County, Maryland. In fact, there was only one church on the area, serving both southern York and northern Harford counties, and we see many people crossing the border, even to live for several years.

It is in Harford County that the first documented reference to William McCullough (1768 – 1840) is found : his marriage to Rachel Sheridine in MD in 1796. The Hull’s birth-date for Mary McCullough pre-dates William’s marriage to Sheridan’s mother by two years, and census records tend to support this. We don’t know if this was a transcription error or if perhaps Mary was born prior to the marriage or was the daughter of an unknown first wife. However, since both stories talk about Mary McCullough Hull and her husband, only varying in how she was related to William, we can be relatively sure that there was a connection.

The Hull papers claim that Rachel Sheridine was Mary’s mother despite the difference of this date with the (transcripts of) the marriage date. The Hull papers also name James McCullough of York County as the father and Nancy Weldon, a woman of English parentage, as his wife. Mary named three of her children Rachel Sheridine Hull, William McCullough Hull and Rebecca McCullough Hull (Rebecca was Mary’s husband’s mother’s name), which goes too far to be a coincidence and supports the Hull version of Sheridan’s ancestors.

James died in York County in 1788, and in his will, names a William as one of his heirs. He also mentions sons John and Jacob, and daughters Mary, Margaret, Rebecca and Sarah. This Mary could have become confused with William’s daughter Mary McCullough Hull, and although there is no Archibald, there is a John who was almost certainly older than William and who appears to have served in the Revolutionary War, similar to the McCullough story. James refers only to his “wife” in his will, without naming her, but an Ann McCullough signs above the names of the sons and daughters, and is presumably the wife. Nancy was originally a diminutive for Ann and in the 18th century, the two names were often used interchangeably. This too fits the Hull story.

At this point, there is very little to support the Hugh Story and there is nothing to dispute the James story. James had a son named William of the right age. William is reported as single in tax lists through about 1790, narrowing his age and also fitting with what we know. His location makes it possible that he would have found a wife in Harford, particularly since it is likely that they attended the same church. Several of the names and places are similar in both stories, making it likely that we are speaking of the same family and that there is some truth in both stories.

Unfortunately, it is difficult to follow William in census records until 1820, when Mary had already married Hull. The McCullough story only mentions that Sheridan was “a” son of William McCullough, making it possible there were other children. From census records, it seems likely that Sheridan had a slightly older brother, James. This too would fit the Hull story.

On the other hand, where there is smoke…  It seems unlikely that Sheridan’s children made up the names Hugh and Archibald. John and Mary are common names, but Hugh and Archibald are much less so. Although at this point, it seems unlikely that Hugh was the father, there could have been a Hugh and an Archibald connected to the family in some way, perhaps even as the grandfather or a brother of James, since it is quite possible that James immigrated with his family. For now, though, our working theory is that James is correct. This is also one of the places where DNA might be able to solve the mystery. Let’s hope that the right McCullough cousin takes a Y-DNA test soon!