Home DNA Discoveries DNA tests for genealogy – what do we learn? mtDNA

mtDNA (or mitochondrial DNA) tests trace descent along matrilineal lines – so your mother, her mother, your mother’s mother’s mother, etc.. Both males and females can take this test, but only females will pass the DNA to the next generation. Because this type of DNA does not recombine before being passed to the following generation and mutates slowly, it is possible to go back many, many generations. Unfortunately, women’s last names are often hard to trace in earlier records and generations. Any mtDNA matches you find that share your current surname will probably be coincidental or perhaps have resulted from cousin marriages in small communities in the case of a close match.

Two of our family from different matrilineal ancestors have been tested so far. The results lead to a haplogroup classification, a group sharing a similar combination of “alleles” (alternate forms of a particular gene) at different  markers. The particular combination of alleles found can give clues as to the early origins and migratory route of that particular ancestor. Similarities and differences between matches can tell us how long ago two lines split. Close matches may even give new information on recent matrilineal ancestry.

The above image, which has been altered and does not represent any living person, is an example of a typical mtDNA report. The numbers represent variations in the mtDNA compared to one of two standards: the revised Cambridge Reference Sequence (rCRS) and the Reconstructed Sapiens Reference Sequence (RSRS).

The tab showing in the above image is the Reconstructed Sapiens Reference Sequence (RSRS). This is a sequence built from samples of both modern and ancient human mtDNA. It is fairly new, having been introduced in 2012. In contrast to the rCRS, this sequence does attempt to reconstruct a likely haplotype for an ancient ancestor of both modern humans and other ancient populations such as Neanderthals.

One of our matrilineal lines tested as I2d. Haplogroup I is a fairly rare matrilineal line. I as a whole is found in an average of just 2% of Europeans and under 1% of Near Easterners. I2d is found primarily in northern Europe: the Baltics, Scandinavia and Great Britain/Ireland, and to some extent in the Caucasus and among the Pasiegos of Cantabria in northern Spain. The migration route was probably from Anatolia through the Caucasus. Considering its wide but sparse distribution, it is likely that I2d was present in the populations that first colonized Europe. The estimated age of I is about 30,000 years, and of I2d about 8000 years. 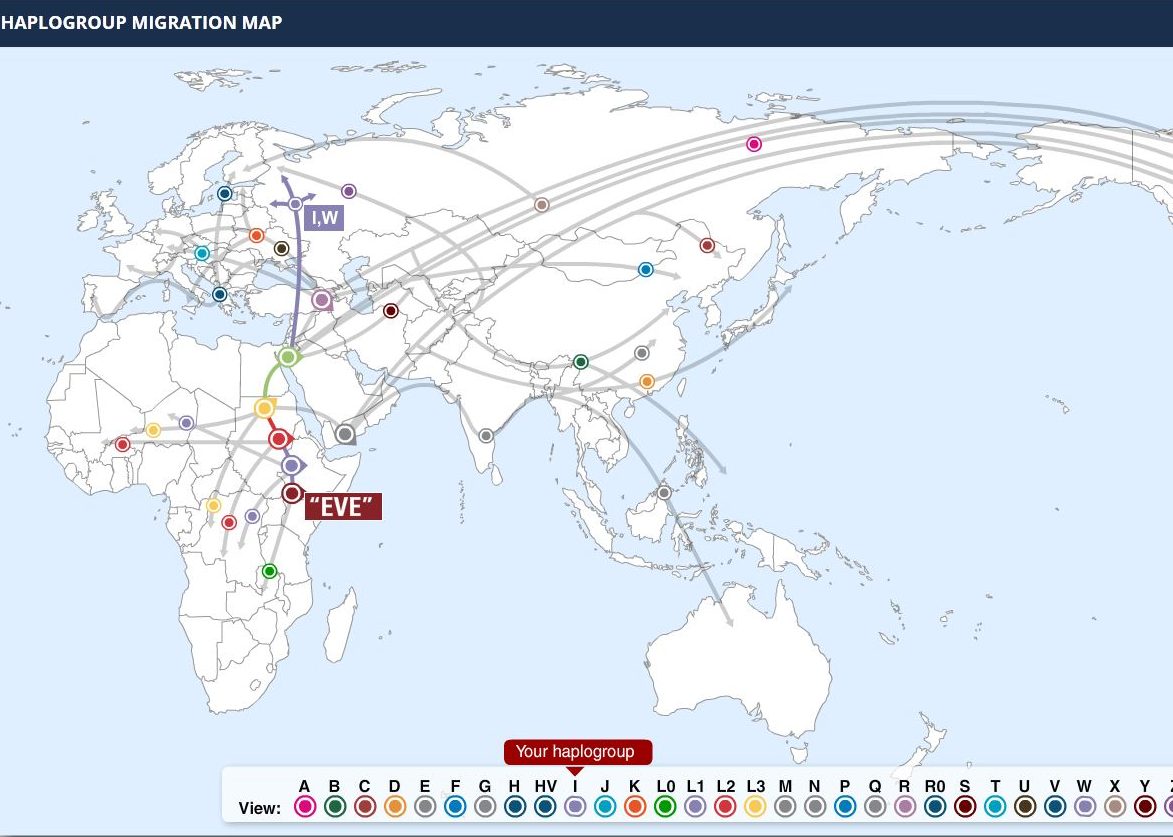 Migration route out of Africa to Europe for I 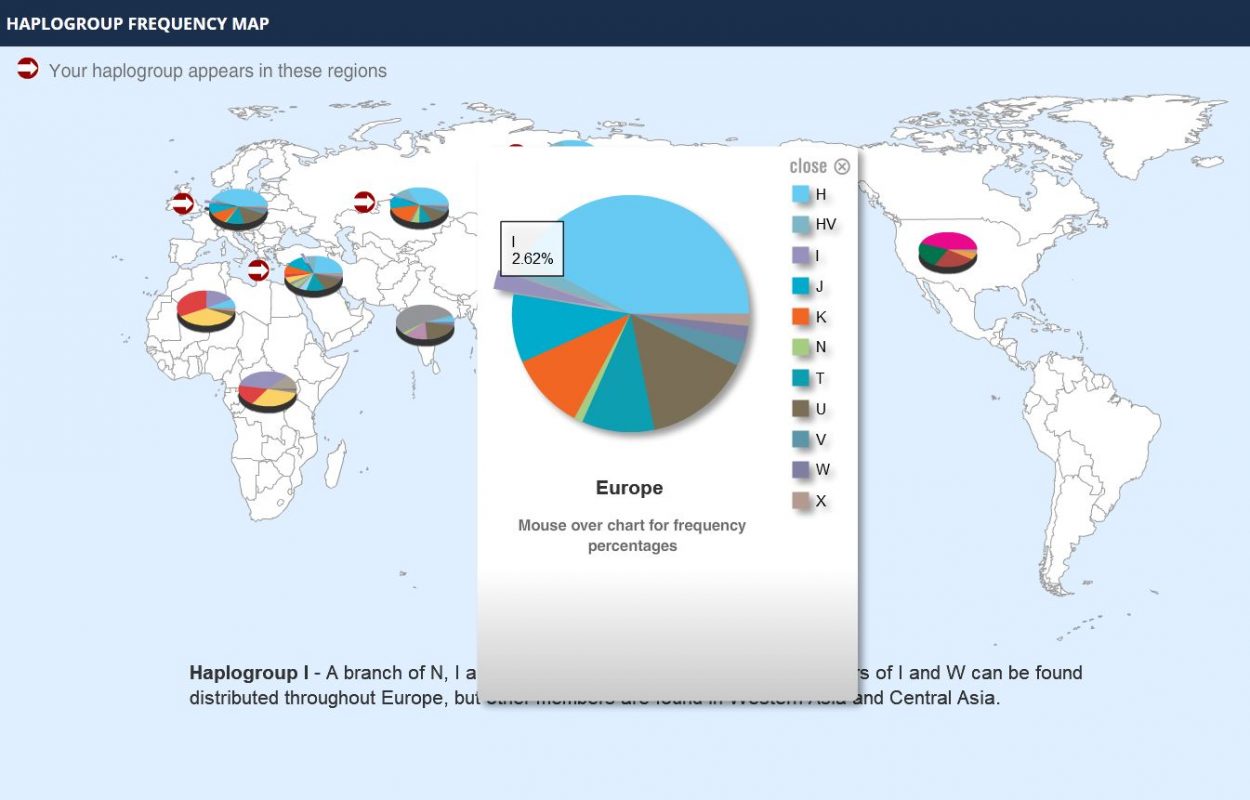 Frequency of Haplogroup I in Europe in general. 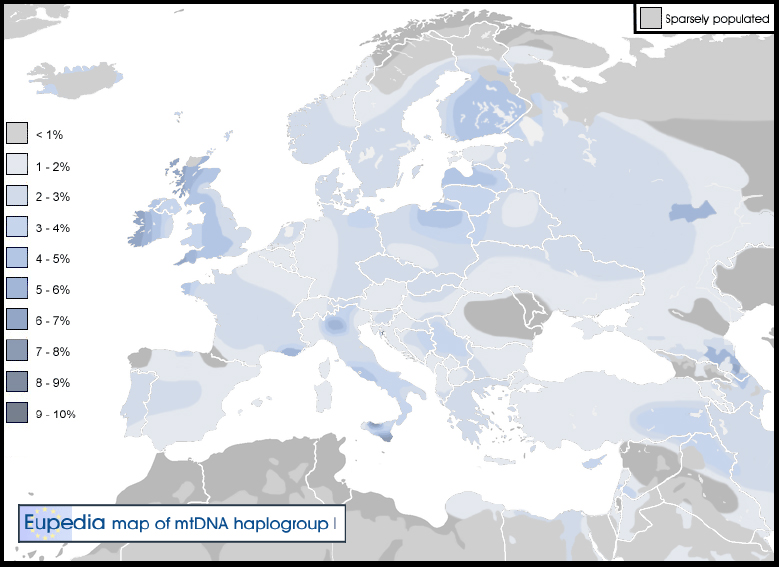 Map showing locations where Haplogroup I is found in Europe.

Our earliest known matrilineal ancestor in this case was Catherine (or Kate) Lehner/Lehnert or Leonard, born about 1840, probably in Tennessee. Unfortunately, this particular ancestor holds the record for having been named as born in the greatest number of different states in various census records, whether by herself, her husband or by her children. So it is also possible she was born in Arkansas, Missouri, Mississippi or Kentucky.

She first married George Washington Outlaw, who died around the birth of her daughter Georgiana, in 1861, possibly in the Civil War. She soon married Thomas Williams and eventually ended up in western Pennsylvania. Her descendants include Georgania Outlaw (married Steele, then Ivory), Goldie Steele (married Ivory), Florence Steele (married Fry – no female descendants), Gloria Ivory (married McCullough), Georganna Ivory (married McIlveen and then Edgerton), and John and Anna Williams. In the Williams line, there are no surviving matrilineal descendants.

Haplogroup T1a1i is a younger haplogroup, estimated at about 6000 years. The T group itself is older, also about 29,000 years. The split between T1 and T2 probably occurred 21,000 years ago. It is thought that this group played an important role in spreading agriculture across Europe. While not as rare as I, it is still not the most common haplogroup in Europe, with a frequency of just under 10%. 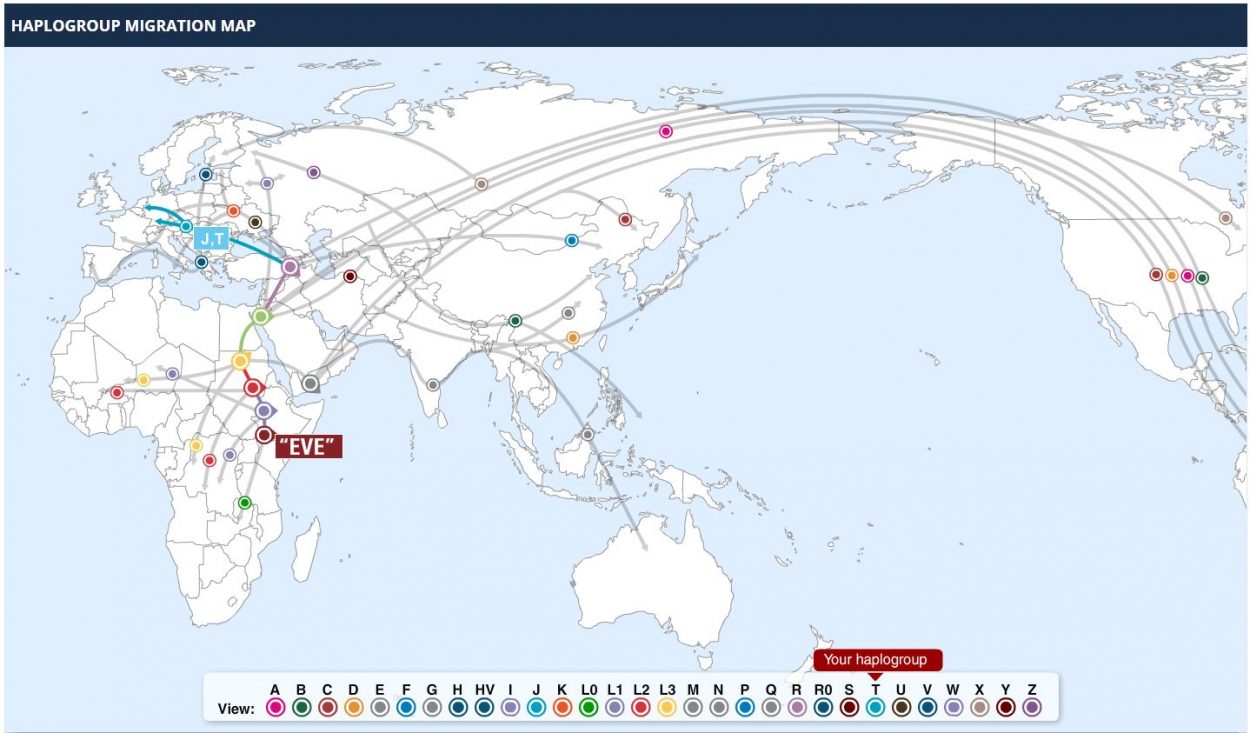 Migration route out of Africa to Europe for haplogroup T. 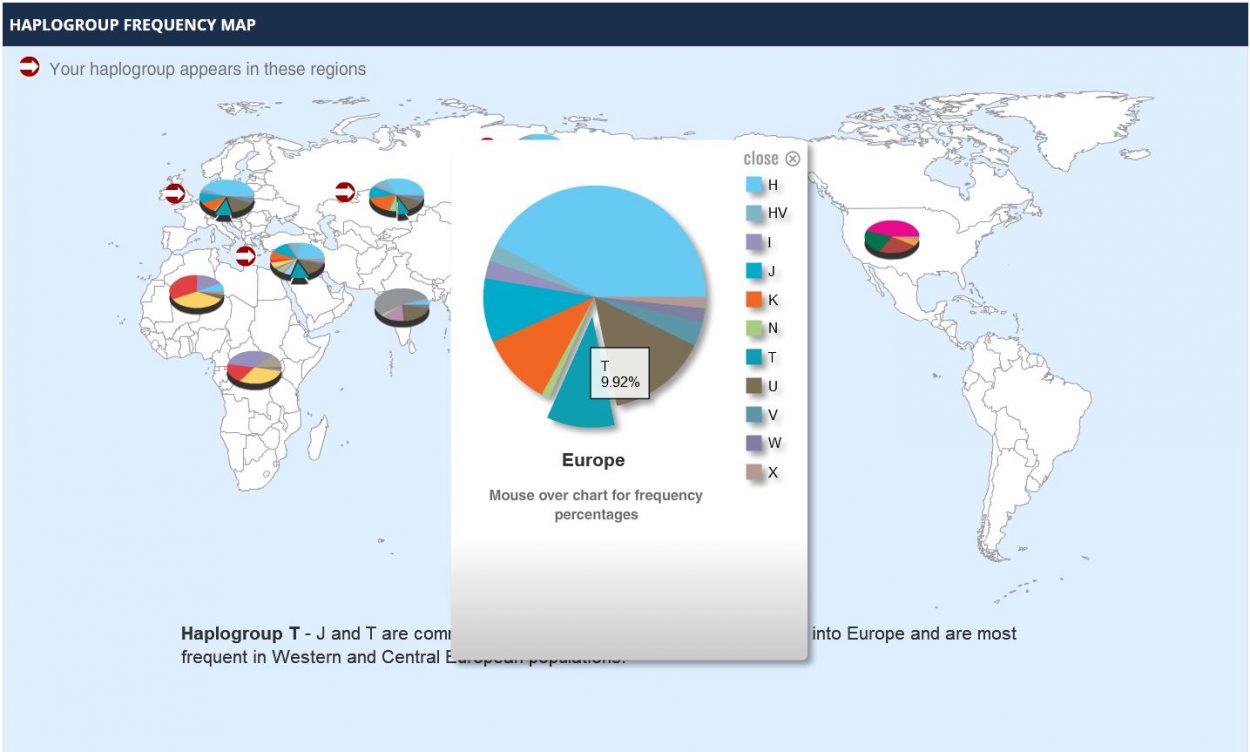 Frequency of Haplogroup T in Europe in general. 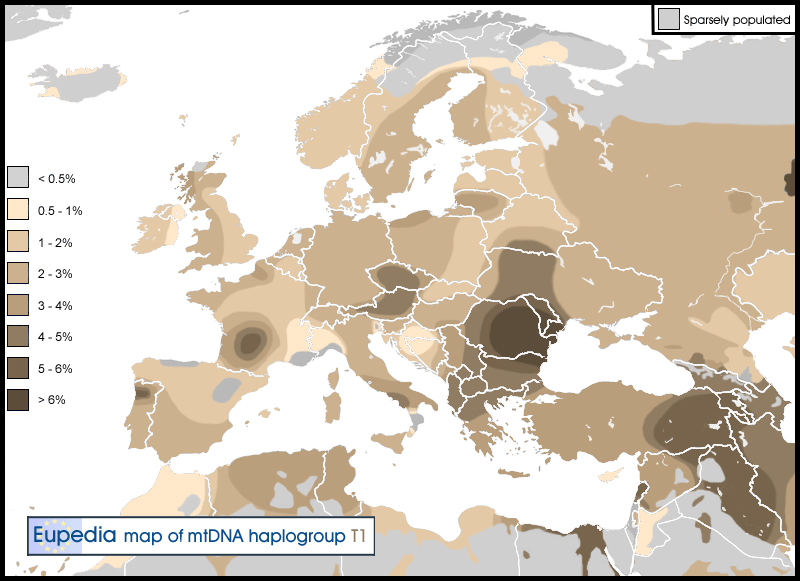 Map showing locations where Haplogroup T1 is found in Europe.

Today, concentrations are found in south-east, central and to some extent, north-west Europe, including Scotland, Wales and western England. It is likely that our recent ancestors in this line were from Western or South-west Scotland. Fortunately, we can trace this line further back in time than I2d. Records for Margaret Barnes are fairly solid. The only mentions of Jane Hazlett come from SAR and DAR applications, with no supporting documentation. One record also gives the choice Mays or Hazlett for last name, again with no supporting record. According to these applications, she married in Westmoreland, PA in 1778, where our next ancestor was born in 1779. Her Husband came from Londonderry but that is no guarantee that she too was born in Ireland. Unfortunately, her two known children also died before census records included the parents’ birthplaces, so at the moment, we can’t get back further.

If you are be related to any of the people mentioned above and want to share information, please let us know.