The Frampton family is another interesting branch of our family for which we are lucky enough to have some records dating back to at least the 1600’s. The first Frampton for whom we have records in America was nearly certainly William Frampton who lived in New York and Philadelphia between 1678 and his premature death in 1686. This William was the first in America of many Williams. Please note that the use of William I, II and III below is simply to sort out the Williams, and was not part of their name, just as “William Kent Frampton” – frequently found in family trees – is not correct.

Because of his Quaker religion and his involvement with the early Pennsylvania government, as well as his merchant activities and land transactions, many documents have survived the years. In truth, wife Elizabeth Potter, an outspoken member of the Friends community, may have been the more interesting member of the family. Because this is such an interesting and well-documented story, William Frampton will eventually have his own sections, the first of which is here.

Descendants of William Frampton – or not?

William Frampton had a son, Thomas (this is documented), and according to family tradition, a grandson John. John is the first person we – or anyone else, as far as we know – can definitely connect to our line through paper records of their time. However, the family tradition is so strong, that this history is taken as a “given” by most researchers. 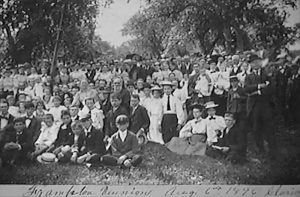 The most well-known source for early Frampton history is The Frampton Family by J.S. Wrightnour. Wrightnour seems to have been an accurate researcher. A distant Frampton “cousin” and I have been re-doing Wrightnour’s research, hoping to find the missing proof.

We have uncovered some new information not mentioned in the book, as well as nearly all of the documents that Wrightnour also mentions, but still no proof yet that William’s son Thomas ever had a son named John and/or that “our”John Frampton was really descended from either Thomas or William I. On the other hand, there is absolutely no evidence that it is not true and no facts that really offer an alternative ancestry for John.

As far as we can tell, Wrightnour’s primary source was our ggggrandfather William Frampton (hereafter William III, 1803 – 1883) who presumably heard the story from his father and his grandfather, John’s son William II. William II died in 1829 when William III would have already been 26 and so, and in our opinion, old enough to have gotten the story straight. Still, it is only second-hand family tradition. Another interesting fact is that in some Frampton family histories, Thomas is left out, and the descendants claim that John was the son of William, which is physically impossible. However, as Wrightnour says, everything else that William III told him could be verified in other records, so chances are high – but not certain – that this family tradition is also correct.

William Frampton’s ggrandson William II served in the Revolutionary War, and as mentioned, it was William II’s grandson William III who was most likely the primary source for Wrightnour’s book. William III’s daughter Elizabeth Jane Frampton married William McCullough (also one of many Williams in this line!) in 1842, linking the McCullough and Frampton names. 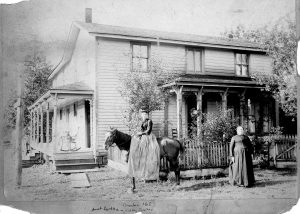 In the HISTORY OF CLARION COUNTY, edited by A. J. Davis, 1887, Chapter XLVIII, History of Clarion Township, by C. S. Hepler, we find the following reference to the Framptons and McCulloughs:

“The only village not incorporated, within the limits of the township, is situated near the southern boundary and is called Mechanicsville, or Frampton P. O. At present it contains a dry goods and grocery store, belonging to and kept by Mr. J. P. Kahle, a hotel known as the McCullough House, a blacksmith shop, a post-office, which has a daily mail, and is kept by Mr. Ed. M. McIntire; a wagon shop, and office of the justice of the peace, A. J. Frampton, esq., also several private residences.  The post-office was so named in honor of William Frampton, esq., one of the oldest settlers of the place, and father of the present justice.”

A.J. Frampton was Elizabeth Jane Frampton’s brother, and the hotel McCullough House is almost definitely the building pictured (click to enlarge). The letters “ough” and “House” on the signpost can be identified. Below are some addition Frampton-related images from our own collection, including images we took several years ago in the cemetery at Summerville, PA and pages from a book that had belonged to my gggrandmother Elizabeth Jane Frampton with a clipping of her parents’ wedding anniversary celebration. The Mechanicsville map shows both the Frampton and McCullough properties, including the corner pictured in the McCullough House photo. If anyone knows which daughters of William & Mary – other than Elizabeth Jane – are shown in the “Aunts” picture, please let us know! 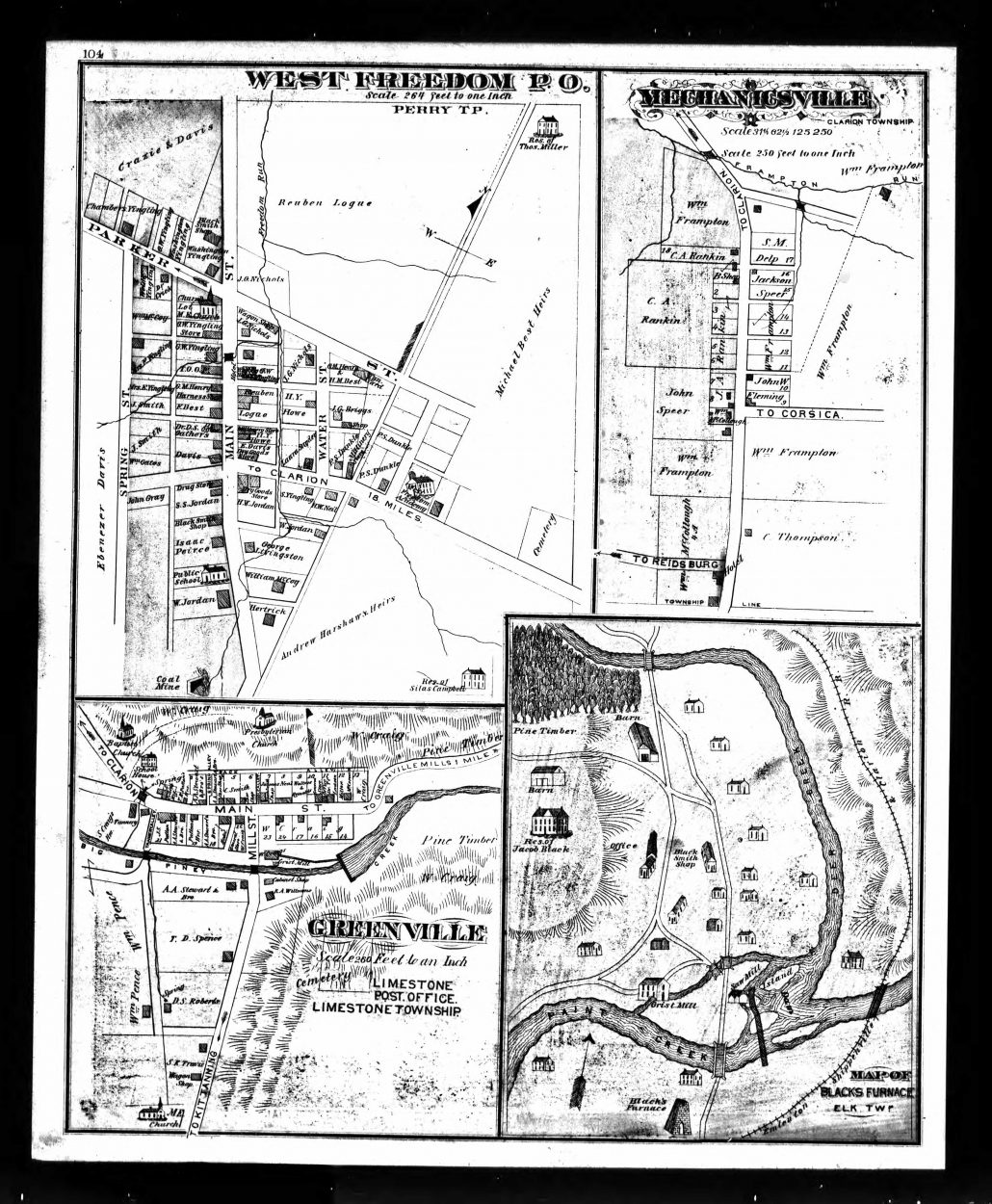 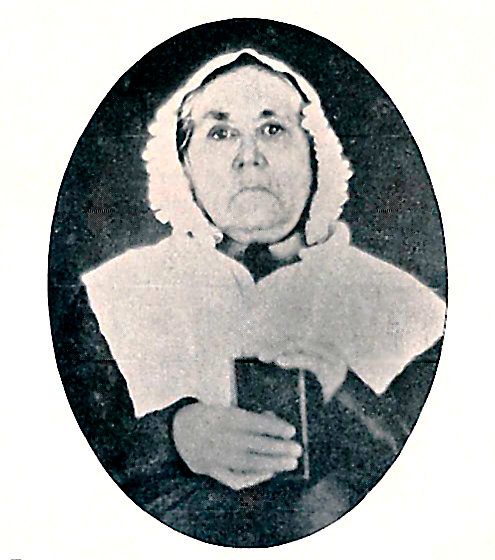 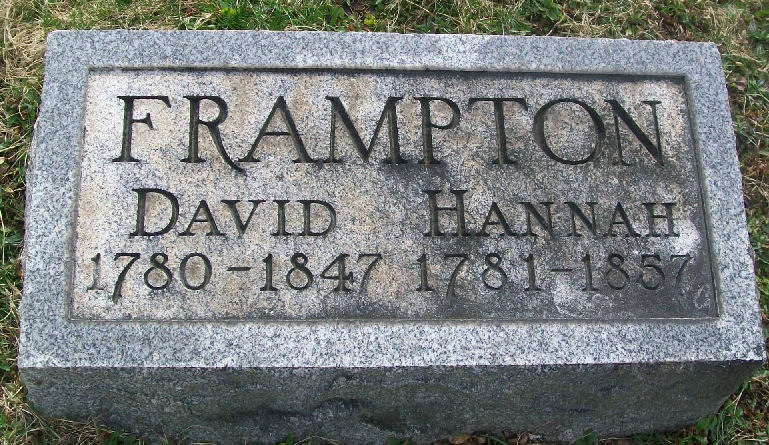 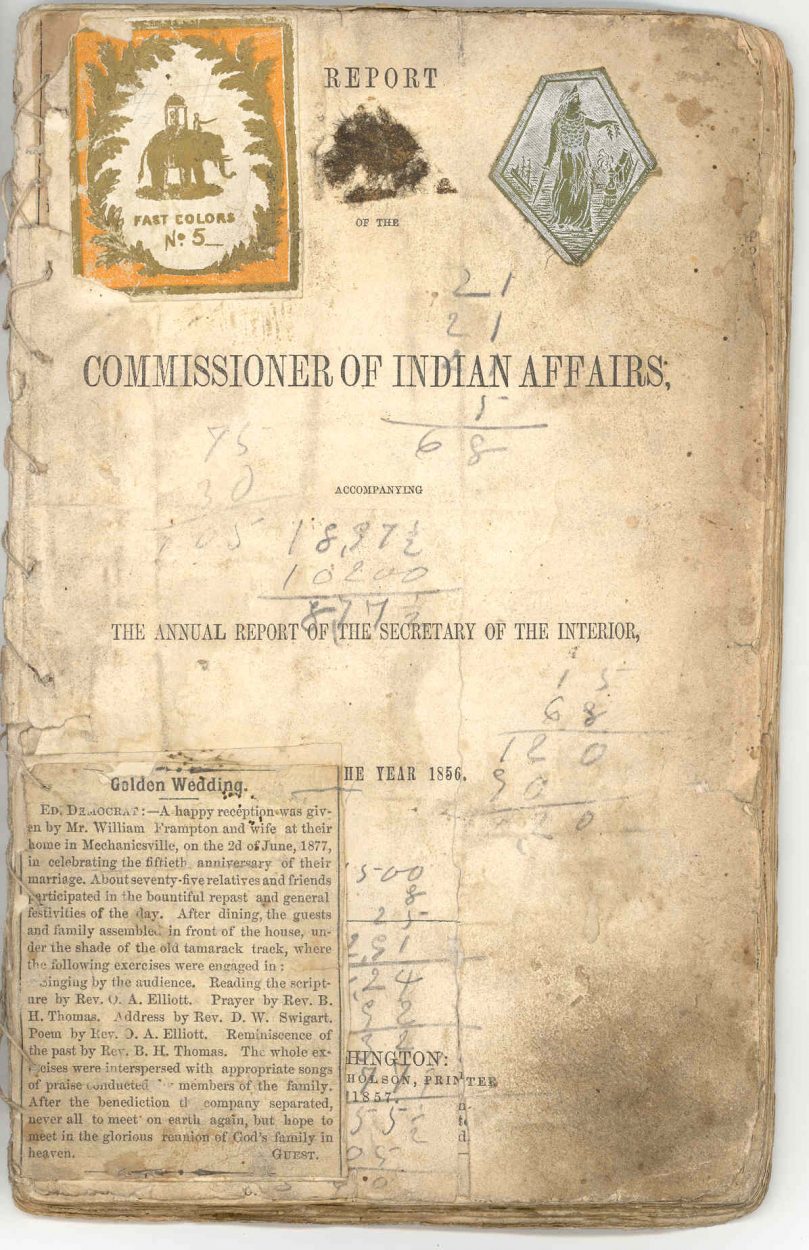 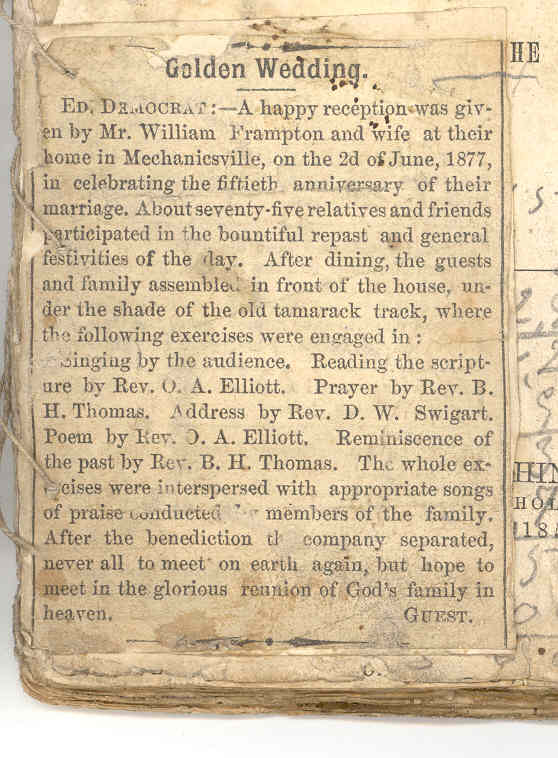 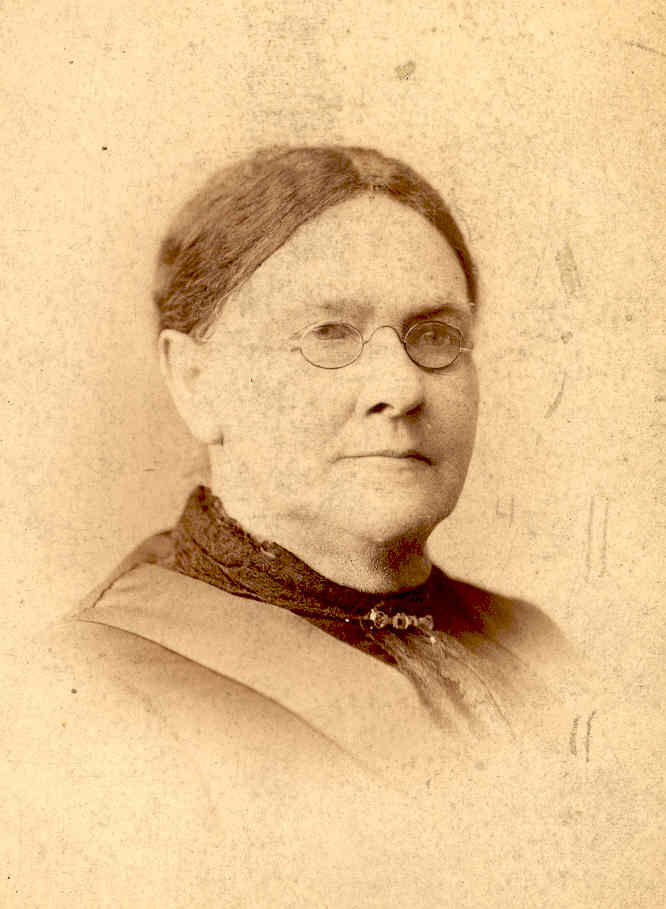 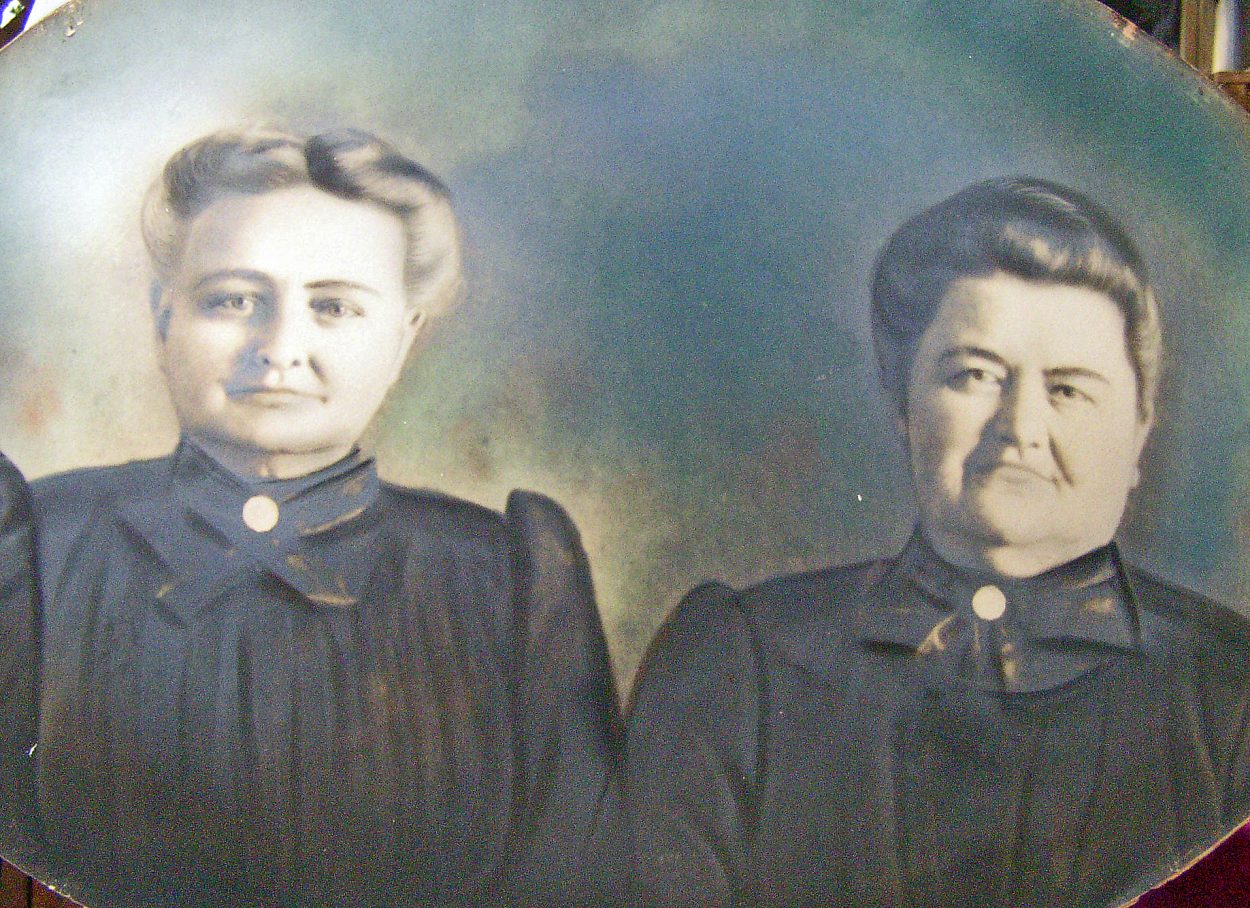 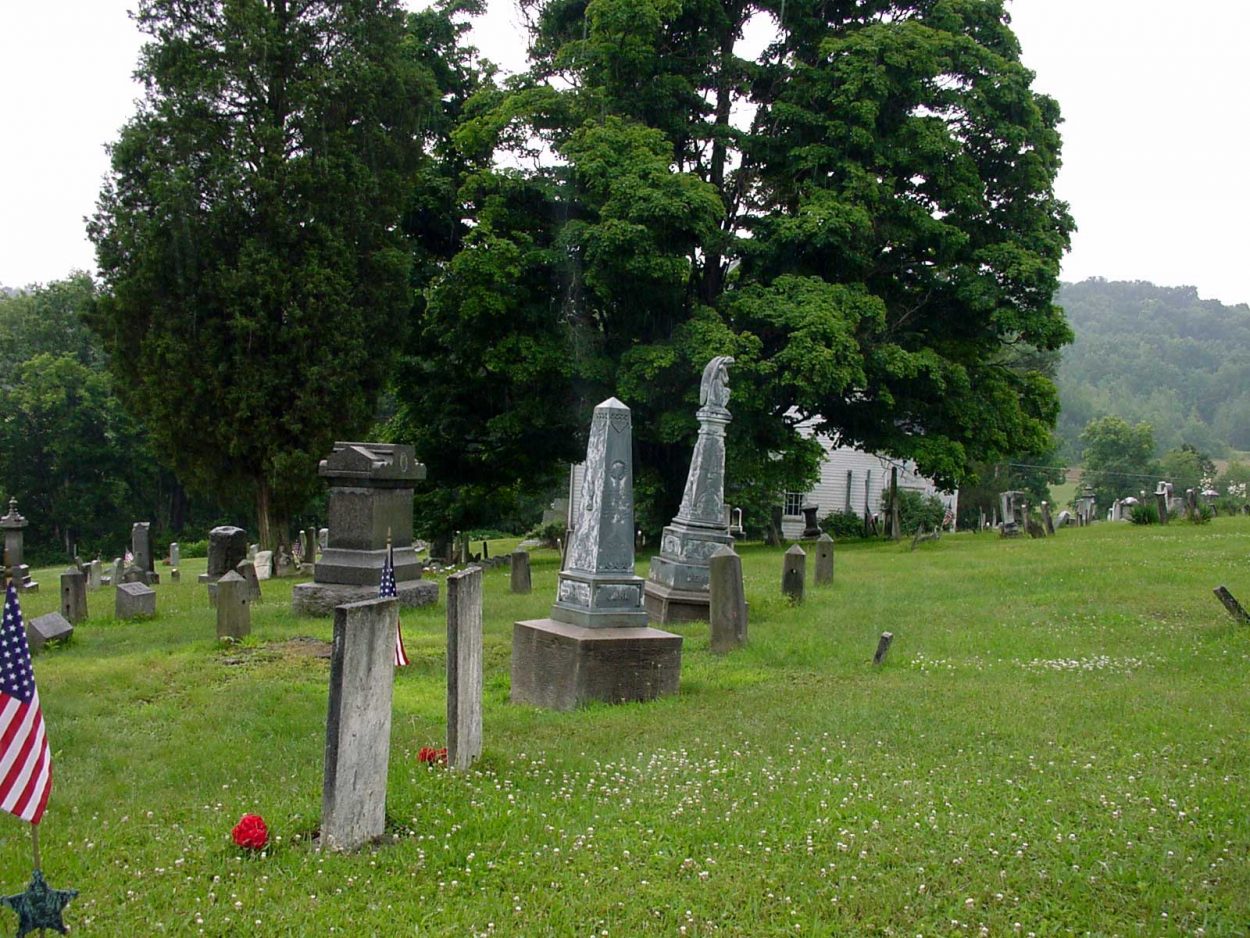 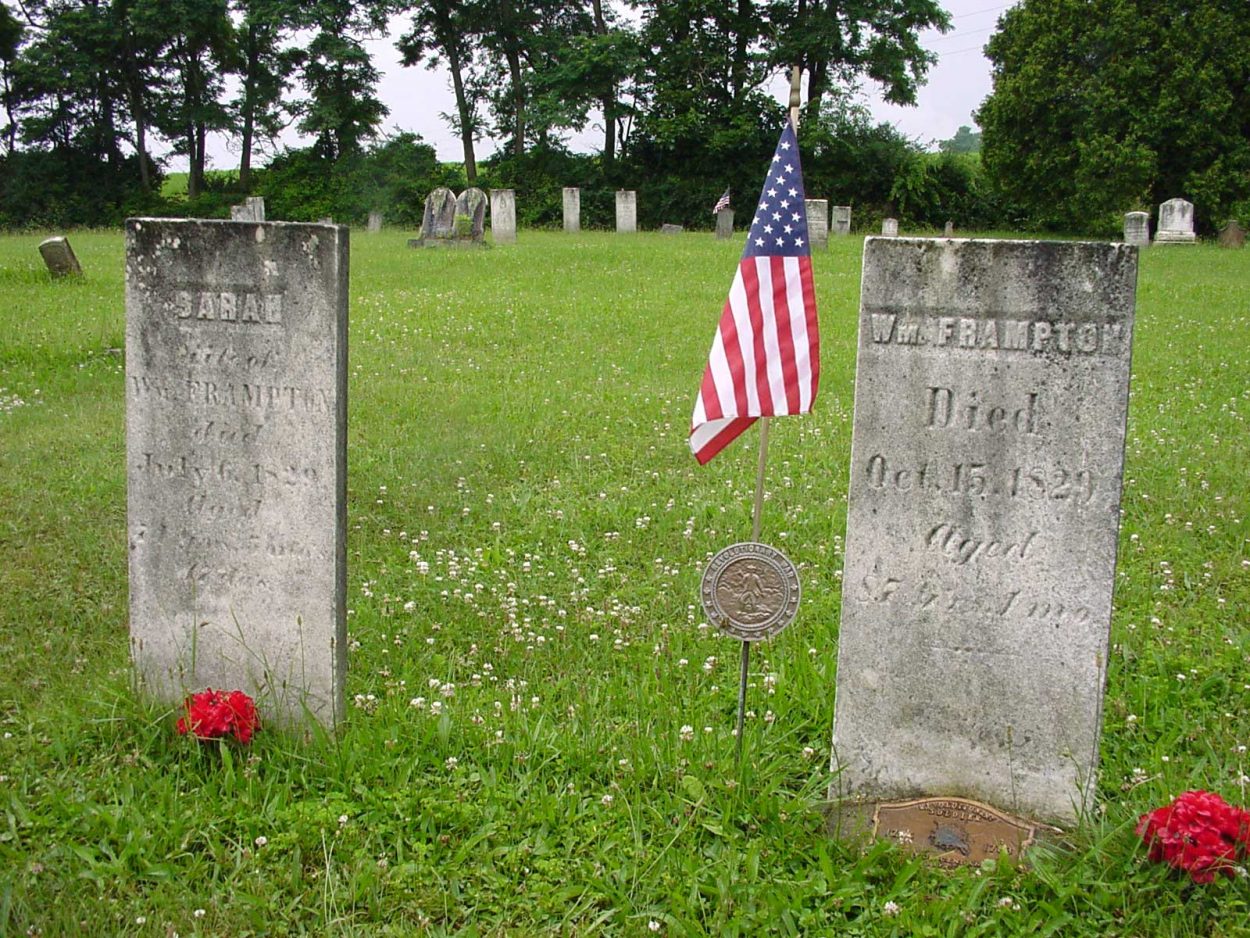 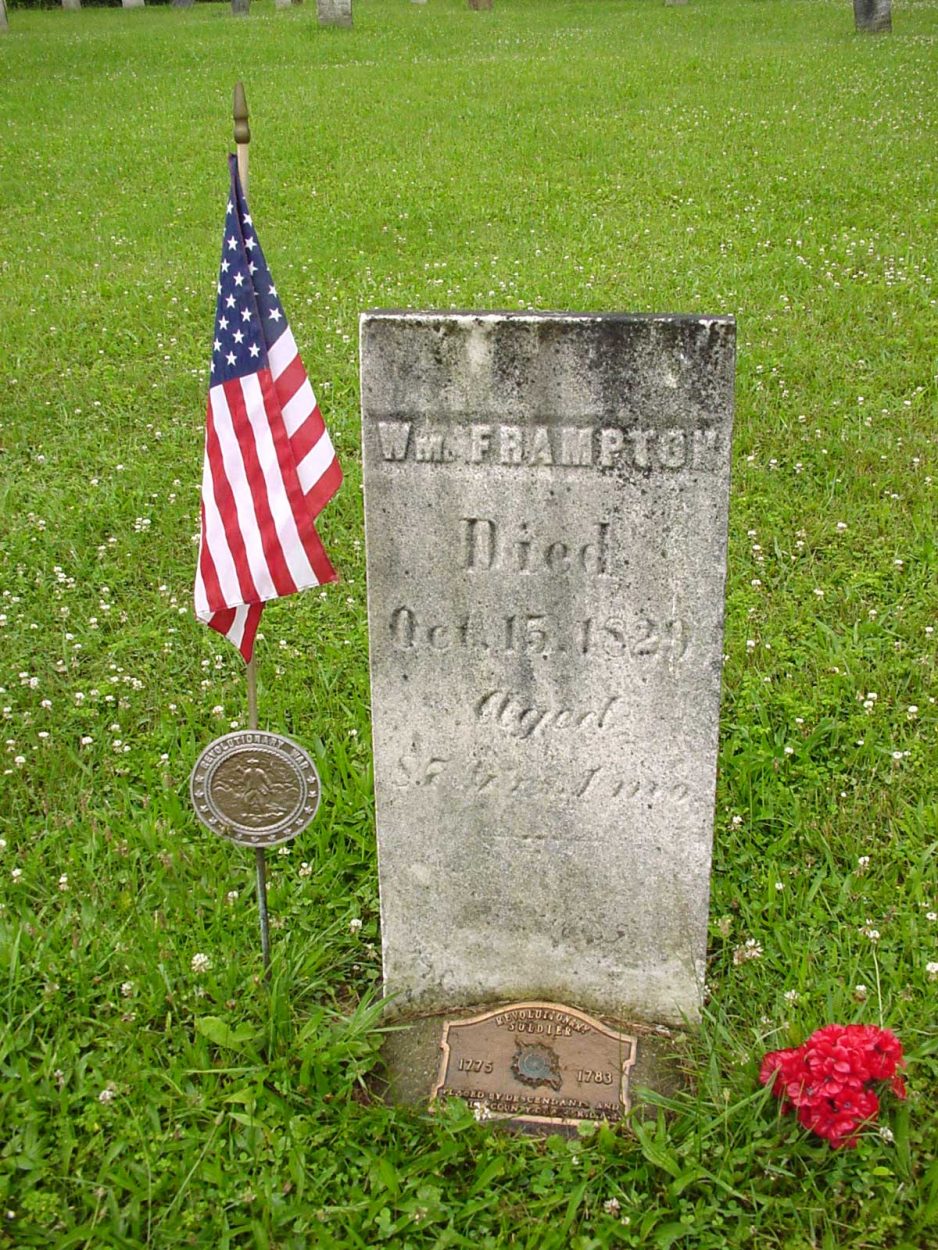 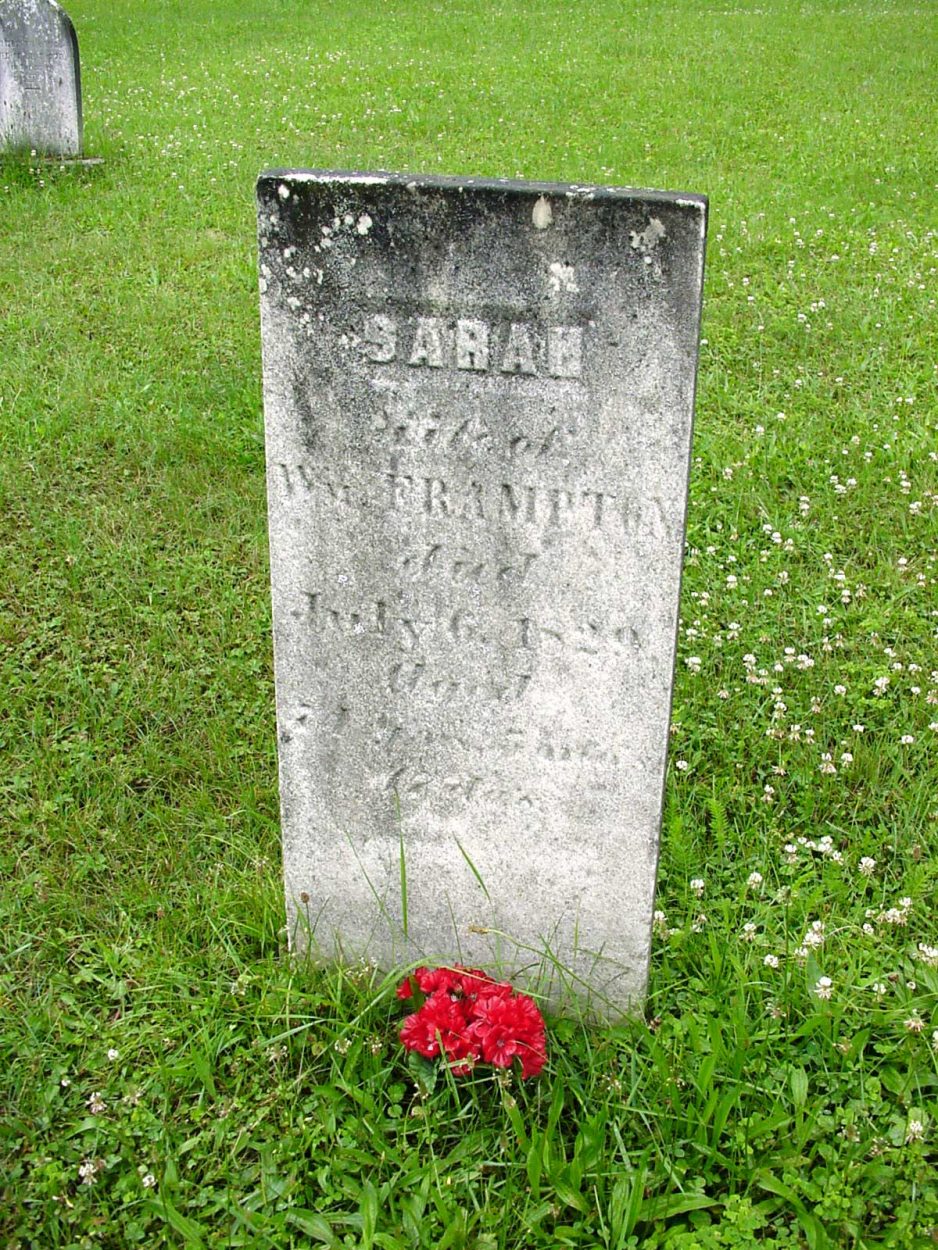 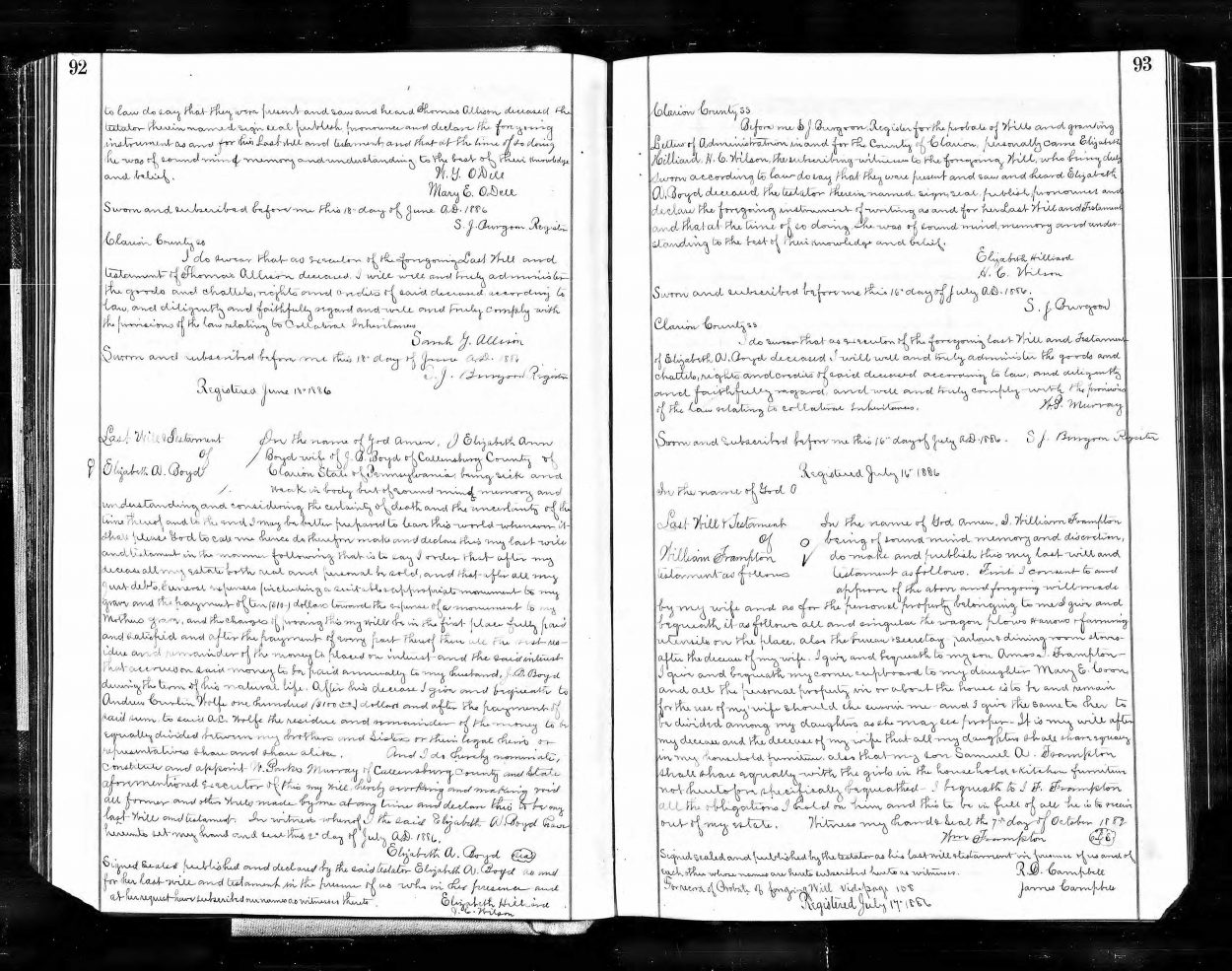 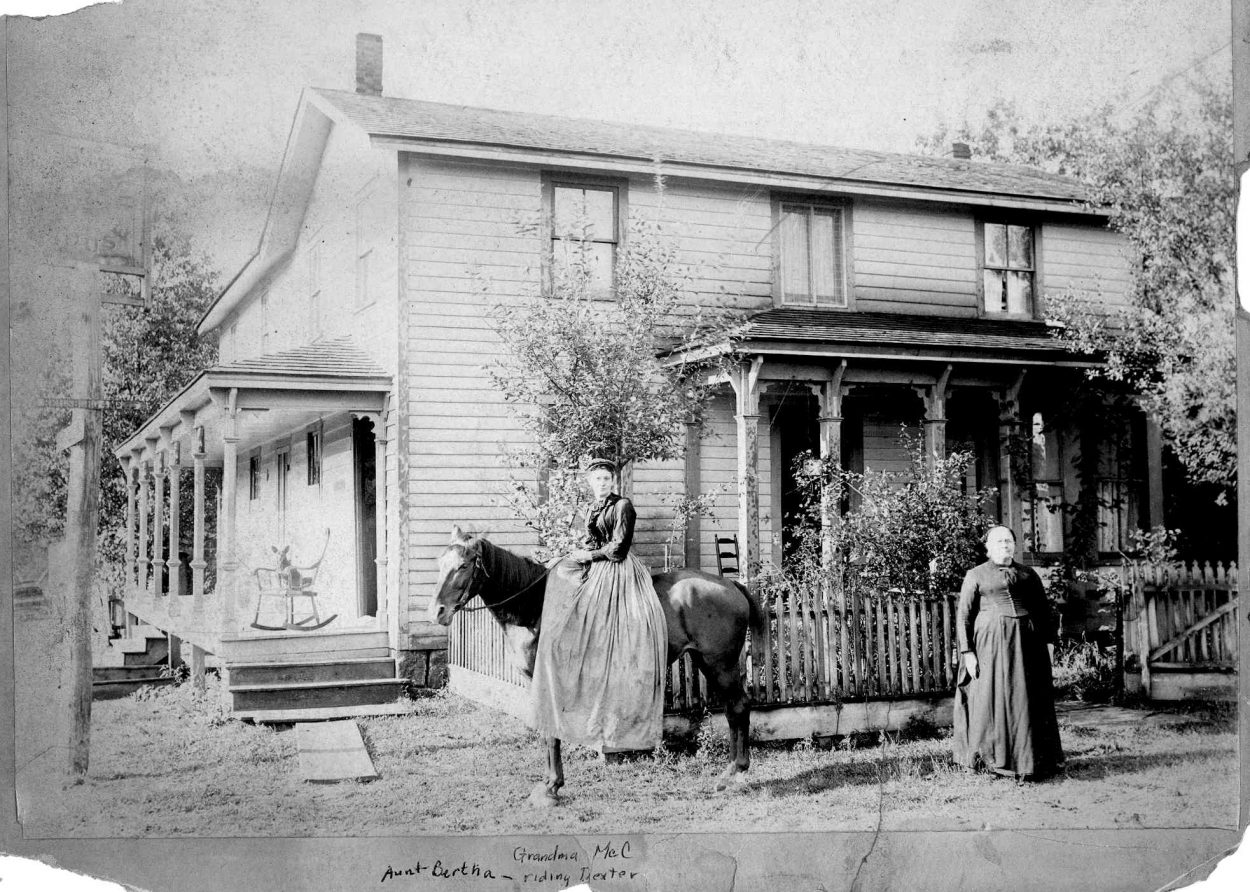 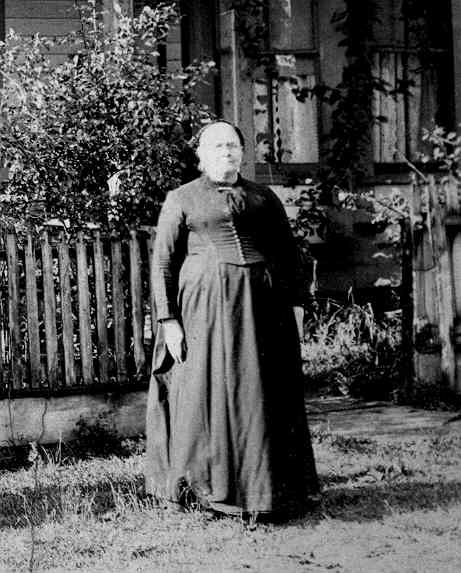 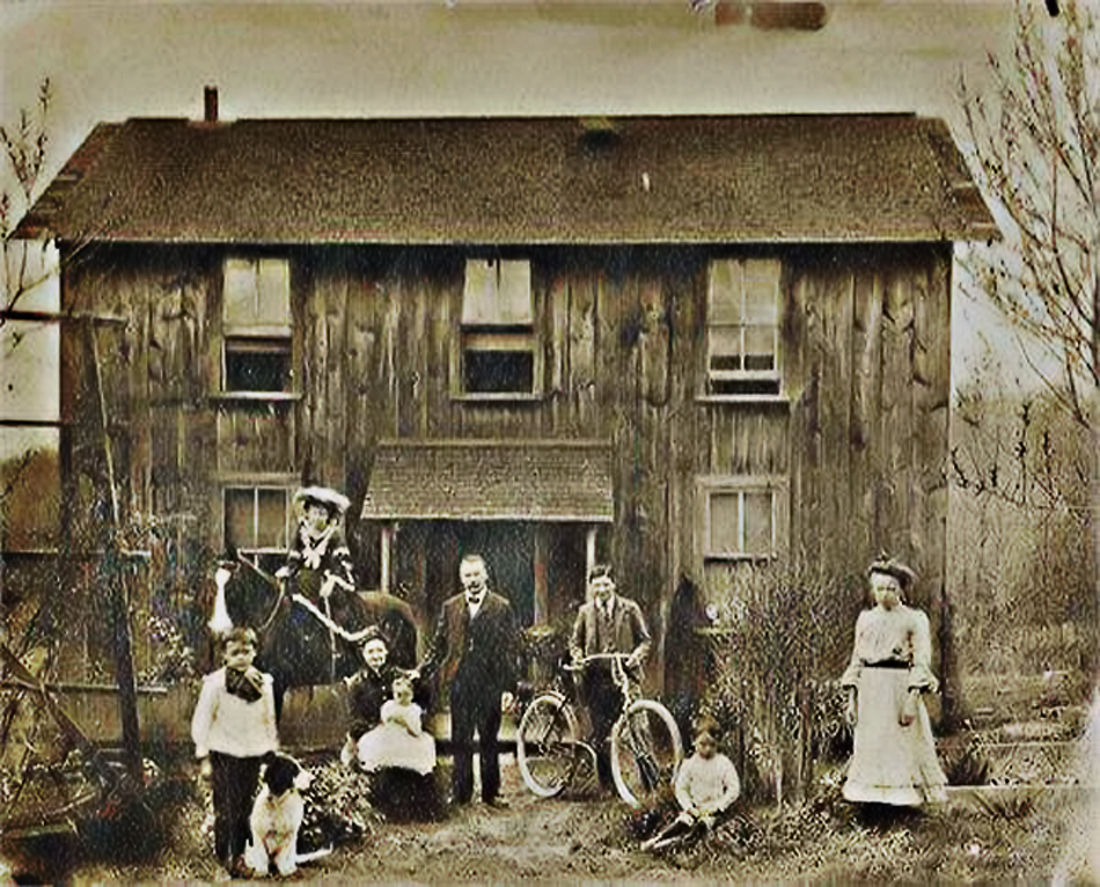 The Clarion County Historical Society’s publication in 1975 titled “Clarion County and its beginnings” tells us the following about William:

“MECHANICSVILLE, formerly called Frampton Post Office, is on the road from Clarion to New Bethlehem. It was one of the very early villages and is about one and a half miles from Brush Run settlement, the earliest settlement in what is now Clarion County. The post office was named Frampton, for William Frampton, an early settler there. His wife, Mary Williams, was daughter of Amos Williams of Williamsburg. William Frampton was not only a farmer, but also a mechanic and made all his own tools and some for others. He had three apprentices who worked for four dollars a month, and they had to provide their own candles. This activity resulted in the settlement being called Mechanicsville.”