Home DNA Discoveries DNA tests for genealogy – what do we learn? Ethnicity and Ancient Origins

Early human migration is a subject close to my heart. My first university degree was in anthropology and one of my major projects was to try to trace migrations from Asia through Oceania using blood types – little DNA testing in those days. Life is much easier now on that score! Or is it?

Ethnicity predictions from test companies based on atDNA

When many people take an atDNA test, the result most awaited is often the ethnicity estimate. These results generally focus on the relatively recent past, between 300 – 1000 years ago, depending on the company and the algorithms they use. If you’ve tested at several companies, you’ll probably notice that results can vary, sometimes wildly. If you’ve tested at one company, you may be basking in the happy illusion that “this is it”. It isn’t – but it may come close, and it is still much more information than was available to the general public even ten years ago.

This is still a developing field. Testing companies are dependant upon their choice of “reference groups”, those persons picked to represent a certain population. Since relatively few people have tested in some areas, and even those people may not be certain where their ancestors were 300 years ago, this leads to uncertainties. In addition, people have migrated and intermarried for thousands of years. Different companies also use different algorithms targeting a different depth of ancestry. Where your ancestors lived 800 years ago is almost certainly not where they were living 400 years ago 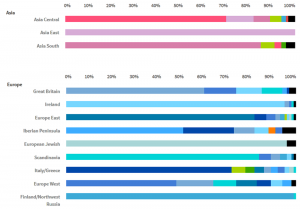 Even when all ancestors have lived in one location for a few hundred years, they will still usually show some mixing. See for example Ancestry.com’s graph of their various reference populations.  When we remember that a person only inherits a random 50% of each parent’s DNA, consider the above variables, and also look at the mixture for British Isles and Western Europe, where there is significant overlap, we can see how this all could lead to differing ethnicity estimates.

A worked example on ethnicity estimates

Take the example of my results analysed at Ancestry, MyHeritage, FTDNA and GedMatch Eurogenes admix:

What can we say about this? True, most of these don’t look much alike on the surface. The best advice for now is to look for common denominators and consider what you know (as opposed to assume) about your ancestry.

Discounting results below 1% which are likely noise, they all come up with 100% European. And if we accept that at this point it is really difficult to split Great Britain, Northwest Europe and North Atlantic, then this combined region scores between 60  and 80%. There is a good Iberian or Western Mediterranean piece with some Eastern Mediterranean as well, a small Fennoscandinavian piece and traces of Eastern Europe.

Looking at my family tree, it would be very surprising if I didn’t have a majority of UK and Northwest European ancestry, and none of these results dispute this. And Iberian peninsula/Western Med which extends to the border region of France where some early Huguenot ancestors most likely lived some 450 years ago is also consistently named, but with differing percentages. However, any person with recent ancestors from Northwest Europe could be expected to have between 10 and 15% from this area.

Many people feel that Eurogenes‘ K15 which you can find on Gedmatch is one of the more accurate admix calculators at the moment, with the K13 a close second. This breakdown of the Eurogenes K13 below gives the split for each modern reference population (left column) into their various ancestral components: 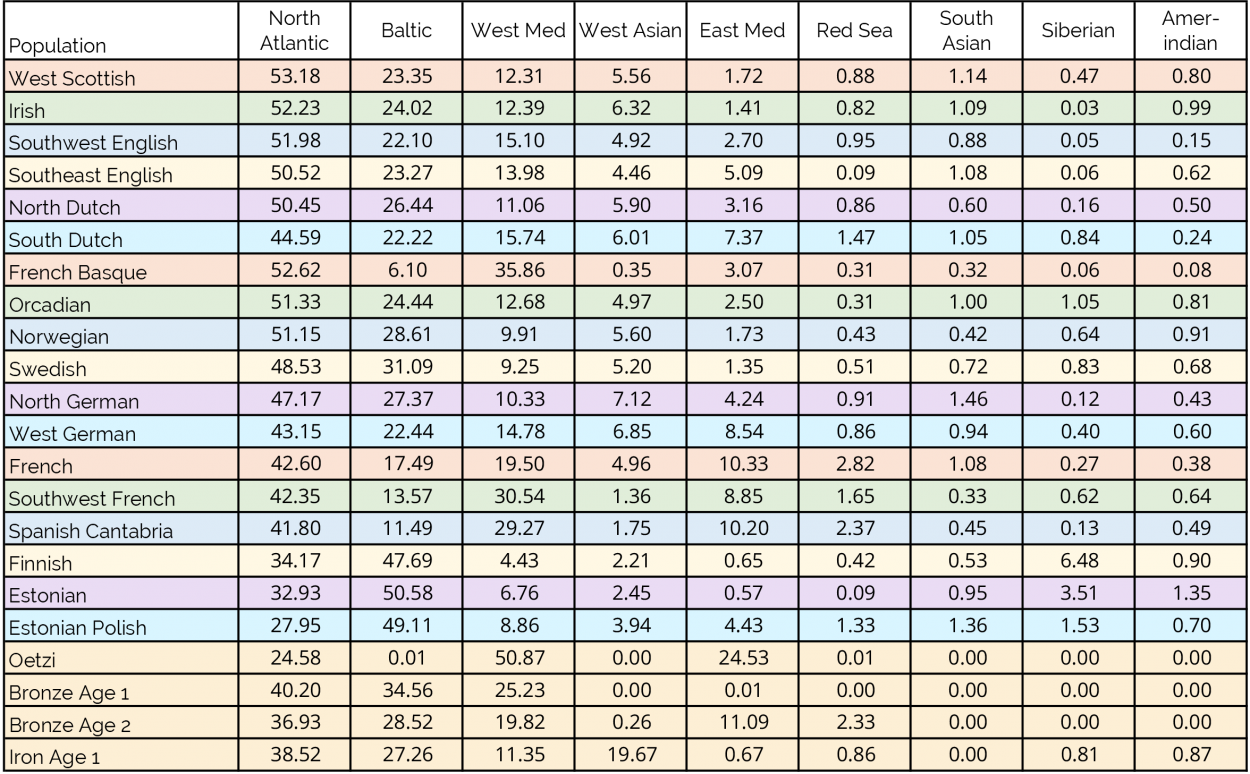 By this measure, my mix is most similar to Southeast English but close to all in the North Sea and North Atlantic areas. Another handy tool uses the Eurogenes K36 data to find similarities with current profiles and comes up with similar results: 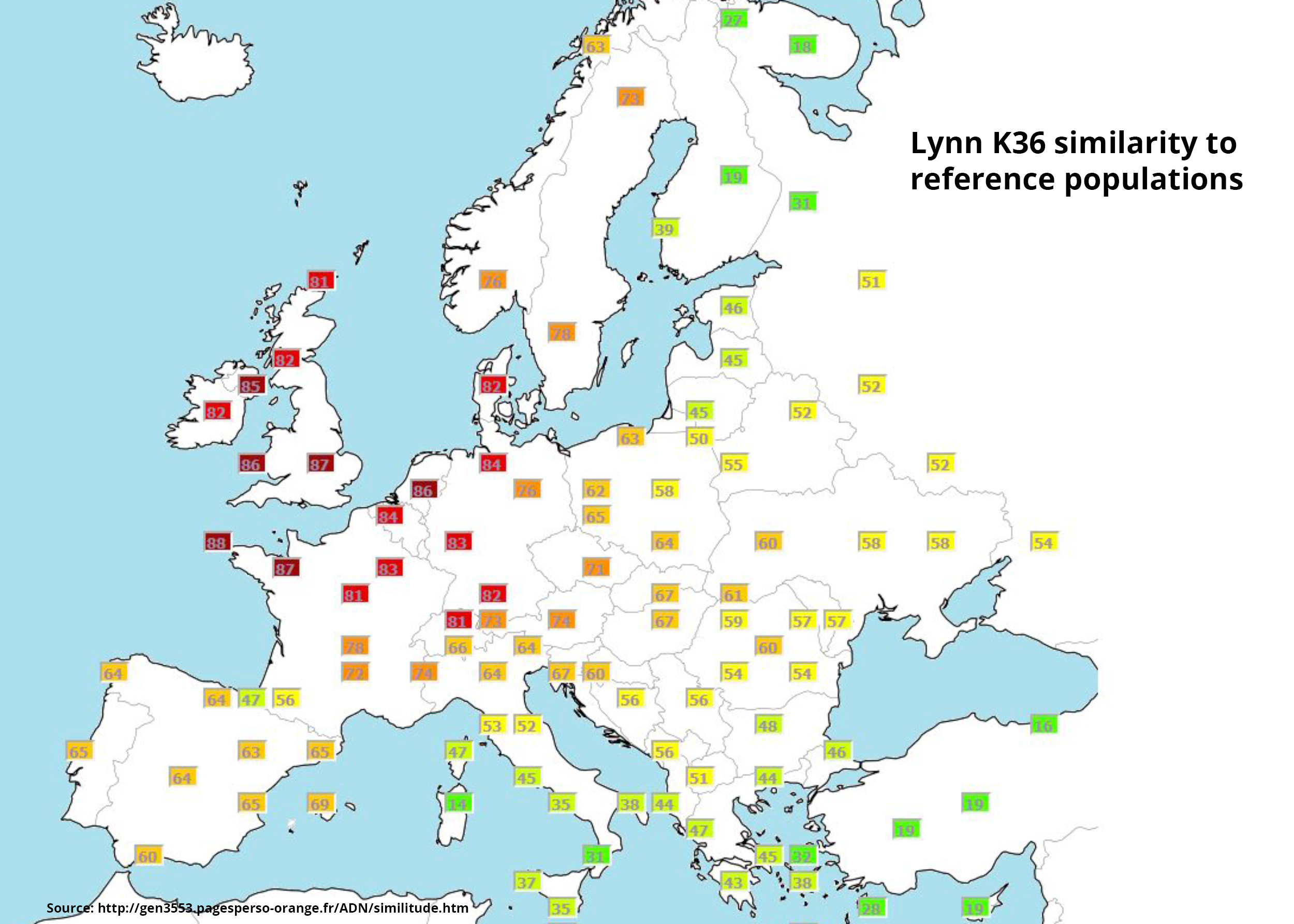 So am I much wiser for having done this testing and this exercise? A bit – and it was fun. The good news is that it does fit my genealogical research so far with few surprises, so that is positive!

Fortunately, ethnicity estimates will improve as time passes, more people test and algorithms improve. All of the test companies are frequently updating their results, so if you tested a while ago, it is always good to check back periodically. If you use what you are fairly sure about your ancestry and also look for the common denominators across test results, you will probably have some useful information.