Home DNA Discoveries DNA tests for genealogy – what do we learn?

DNA tests for genealogy – what do we learn?

There are many good books and websites on the subject of DNA tests for genealogy, and it would be foolish to attempt to reproduce that wealth of information here. Instead, this summary provides a “quick start guide”, especially for near and distant relatives as an aid in interpreting their results as they relate to our mutual family trees and history.

What can we test?

There are three common categories of tests available for genealogical researchers: autosomal or atDNA tests, Y-DNA tests and mtDNA tests. Y-DNA tests follow the patrilineal line (your father’s father, his father, then his father and so on). mtDNA tests follow the matrilineal line (your mother, her mother, then her mother and so on). atDNA tests trace ancestry on all recent lines, and usually include X-chromosome results, which link to a specific subset of autosomal ancestors. 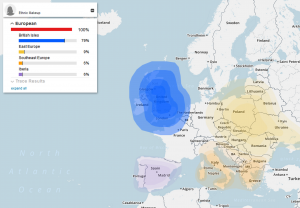 Some of the major companies offering tests are ancestry.com, ftdna.com, 23andme.com, and myheritage.com. At this time, only FTDNA offers all three types of tests. The rest offer atDNA tests.  23andme can also test for health information and provides rudimentary mtDNA information. However, this is not comparable to FTDNA’s full-sequence mtDNA test. Most  companies are now shipping tests internationally, including to most EU countries. In time, this should vastly improve the quality of matches and ethnicity estimates as more people from countries outside of the US test.

Testing is a quick and simple procedure of either swabbing your cheek or spitting into a tube, and then mailing this back to the testing company in the pre-addressed envelope. At FTDNA, it is often possible to upgrade to other tests without resubmitting a sample.

In atDNA tests, all 22 chromosomes from both the mother and father and usually the X-chromosome(s) are tested. The illustration below is from a male, with one X and one Y-chromosome. A female would have two X-chromosomes instead of an X and a Y.  atDNA tests have the advantage of potentially providing information on all of our ancestral lines, not just the patrilineal or matrilineal lines.

Since atDNA is subject to recombination every generation, and sex chromosomes in particular have strict inheritance rules, much information is lost over time. Still, being able to match close and distant cousins of all ancestral lines makes atDNA a particularly useful tool for searching for matches who have a common ancestor within the last six or seven generations. With some work, you might be able to get even farther back on some of your lines.

Of the three tests, atDNA is the least expensive with prices ranging from $39 during promotions (the highest promotional discount I have seen so far) to $69 – 99 at the major testing companies.

In contrast to atDNA, Y-DNA traces only the patrilineal line. The Y-chromosome is passed on from father to son, virtually unchanged, generation after generation. However, changes do occur with some regularity, and these changes give clues about the deeper ancestry of our paternal line, going back to a fictional “Adam”, the most recent common male ancestor of all living males. “Adam” probably lived between 200,000 and 300,000 years ago.

This is certainly not to say that this Adam was the oldest male human, or the only male alive in his time, but simply that all Y-DNA known at present can be traced back to DNA with his profile. Since a male with no children or only female children will not pass down his Y-DNA to a following generation, there have been millions of men whose lines have “daughtered-out”. A case in point is our own McCullough branch, of all the descendants of a McCullough born in 1863, there will be no Y-DNA carriers after the current generation.

Y-DNA tests can only be taken by men since women receive an X and not a Y-chromosome from their fathers. When your results are matched to those of others, the number of differences or the similarities at particular markers will give you an estimate of when you might have had an ancestor in common. Your estimated haplogroup classification gives information on more ancient origins. Our Y-DNA page gives more information on Y-testing and on our own haplogroups, 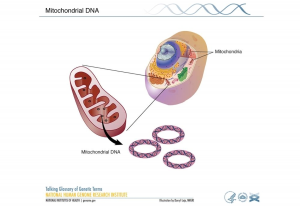 The counterpoint of Y-DNA is mtDNA which can be used to trace the matrilineal line. A major difference with Y-DNA is that both males and females can take the test since sons receive mtDNA from their mother, although they do not pass this on to their children.

Similarly to Y-DNA, there is a fictional “Eve” who is the most recent common ancestor (often abbreviated MRCA) for all living humans. Here too, this does not mean that she was the mother of all humans or the only woman living at the time, but simply that her reconstructed haplotype is the only line with living descendants today.

Unfortunately, it is much harder to trace female lines genealogically-speaking, especially before 1850 or so, since maiden names often do not appear in documents. Still, exchanging information with close matches can possibly help solve some of these dead-ends. As time passes and more people test, this too will become much easier.  Even when mtDNA testing does not give clues on recent ancestors, it will still give the same insights into ancient origins and migratory paths as Y-DNA does.

Our mtDNA page gives more information on mtDNA testing and on our known haplogroups.