According to several histories of this family, the Lyon family immigrated from Enniskillen, County Fermanagh, Northern Ireland between 1751 (William) and 1763 (father John), together with the Armstrong family, with whom the Lyons intermarried several times. John Lyon’s wife was Margaret Armstrong, sister of Col. John Armstrong, and John’s sister Rebecca Lyon became the wife of John Armstrong. To date, I have not been able to find definite proof of the Enniskillen period, although there are several Lyons, including a John, who show up in Fermanagh records. However, several Lyon histories seem to agree on this point, and it is in any case certain that they arrived from northern Ireland.

Our branch of the Lyon family continues through William Lyon to Samuel, born 1775 in Carlisle, Pennsylvania. He married Ester Willis Broom, daughter of Jacob Broom, delegate to the Constitutional convention from Delaware, mayor of Wilmington, surveyor, merchant and gentleman farmer at various times in his career, and Rachel Pierce, his wife.

Both Samuel and Ester died relative young, possibly from yellow fever, of which there were several epidemics in the early 1800’s. It is difficult to fix an exact date for Samuel’s death, however.  Samuel’s father, in his will of 1809, mentions that he had set Samuel up as a merchant and the wording suggests that Samuel was alive at the time. Jacob Broom leaves bequests to his daughter Hetty Lyon but there is no mention of her marital status at the time. In 1812, we find Hetty, assisted by a brother in law, suing her brother over settlement of a piece of land from her father’s will. This also involved Samuel Lyon  but it is again unclear if he was still alive at the time.

From other records, we can deduce that Samuel apparently had some very meagre profits just prior to his death, and left his widow with only a small estate beside what she had inherited from her father. Ester Broom Lyon remarried Robert Eggleston in 1817, A deed from her mother Rachel to Eggleston in 1820 suggests Hester was still alive at that time, but by the time of Rachel’s own will in 1823, she too had died. 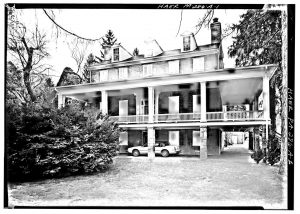 The children, one of whom was our ancestor Jacob Broom Lyon, were raised by aunts and uncles. J.B. Lyon attended Jefferson College and graduated from Chambersburg College, Washington, PA in Civil Engineering in 1829. He became involved in the iron business with his brother John. Although their various businesses had their ups and downs, they formed some of the more prominent families of the Clarion area for many years.

The banner photo shows Jacob Broom Lyon’s wife, Nancy Jane Ross, at about age 83, with one of her daughters, her granddaughter and great-granddaughter. Another daughter, Ella, married William Sheridan McCullough. The house at left once belonged to either J.B. or John Lyon (Library of Congress historical photo). 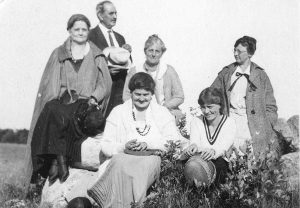 Children of Jacob Lyon and Nancy Ross are:

Children of Samuel Lyon and Ester Broom are:

Children of Joseph Ross and Mary Montgomery are: