The Brintons in England

The Brintons and Bagleys were Quakers who immigrated to America from an area of the West Midlands (formerly Worcestershire and Staffordshire), England including Dudley, Sedgley, and Upper and Lower Gournal. This part of the country is known as the “Black Country” due to coal mining activities that were already going on in the time William Brinton was in the area. In 1659, while still in England, William  married Ann Bagley. They are known to have had five children (three girls, Esther, Ann & Elizabeth, and two boys, William & Edward) between the years 1660 and 1675, but one son, Edward Brinton, died at an early age. Esther Brinton, daughter of William Brinton & Ann Bagley, was the great-grandmother of Jacob Broom.

Ann Bagley’s brother, Edward Bagley, has also become the subject of much recent research, as he was mentioned as a “kinsman” and named as executor of Lady Elizabeth Bernard’s will. Lady Bernard was Shakespeare’s granddaughter and his last surviving direct descendant, and Edward could very well have ended up with Lady Bernard’s (and by extension, Shakespeare’s) papers. Unfortunately, the nature of the connection between the Bagley’s and the Shakespeare family has not yet been conclusively determined, and so it is not yet possible to say if this connection also applied to Ann Bagley Brinton. However, the research article by John Taplin gives at the very least some interesting insights into life and social relationships in the Brinton’s hometown area in the 1500 and 1600’s. I have visited Dudley and the surrounding area, and was fortunate to be able to spend time researching in the Dudley archives.  Some of the Brinton – Bagley story can be found here, but as time goes on, I will be adding more information.

Returning to the Brintons in America: in an effort to escape religious persecution, William Brinton Sr. came to America in the spring of 1684 with his wife and his only living son, William Jr.. The family settled near what is now New Castle, Delaware, and is reputed to have lived in a cave throughout the first winter. They survived thanks to gifts of game supplied by the Indians that traversed the route by their shelter. Once the weather cleared, William built the family a log cabin and planted a pear tree as a symbol of a fruitful future. He purchased 50 acres from Thomas King in March of 1686 and 450 acres in October of that same year in Birmingham. These purchases included the lands on which he was already living. In 1688 he purchased an additional 400 acres. 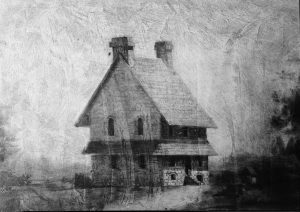 Several years later, the son William, built the William Brinton 1704 House on an adjoining part of this land. William Sr. and Ann had originally left their three daughters Ann, Elizabeth, and Esther behind in England, but a few years later, they and their husbands also emigrated to this area. Our branch of the family settled in Birmingham and Thornbury, in Delaware County, just north New Castle county.

As Quakers, William and Ann had lost much of what they owned to the British government. William was again on the unpopular side of religion within seven years of coming to America as he joined up with the rebellious Quaker, George Keith. This group fractured and broke up after a few years, at which point William and family returned to the Orthodox Quaker church where they were members in good standing at Concord Monthly Meeting at the time of their deaths, shortly after one another. A biography of Ann, written in part by her husband William, was reprinted in “The Friend”, Vol 33, a Quaker publication.

The Brintons and Bagleys tie into our family through Esther Brinton, William and Ann’s daughter, who married John Willis. Their granddaughter Esther Willis married James Broom, and they became the parents of Jacob Broom, delegate to the Constitutional Convention from Delaware. Many of the Broom descendants were active in state and national politics, including one unsuccessful presidential bid in 1852.