Home DNA Discoveries DNA tests for genealogy – what do we learn? Autosomal DNA

Autosomal DNA (or atDNA) has the advantage of providing information on all of our ancestral lines, not just the patrilineal or matrilineal. Since atDNA is subject to recombination every generation, and sex chromosomes in particular have strict inheritance rules, much information is lost over time. Still, being able to match with close and distant cousins of all ancestral lines makes atDNA a particularly useful tool. 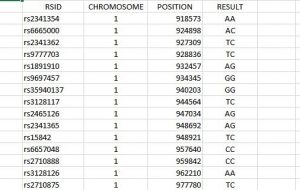 Although it may sound mysterious, at the basic level, our autosomal and X DNA results are simply huge files containing hundreds of thousands of lines, generally consisting of only four pieces of information per line: the location or marker that was tested (RSID), the chromosome, the position, and the pairing combination of the base nucleotides cytosine (C), guanine (G), adenine (A) or thymine (T) that was found. These generally pair according to rules (A with T and C with G), but variations occur.

The DNA results of two or more people are compared to determine if they have matching sections of chromosomes. The longer a matched segment is and the more matching segments there are, the more closely related the individuals are likely to be. This segment length is generally described in terms of centimorgans (abbreviated cM) which takes into account how often recombination occurs in a particular region. 1 cM roughly equals a 1% chance that a marker at one genetic location on a chromosome will be separated from a marker at a second location due to crossing over in a single generation. For instance, a 30cM match on one chromosome might have a different absolute length on a second chromosome due to different tendencies for recombination.

When looking at matches, it is best to start with the largest first. Generally, matches of less than 7cm are considered tricky for reasons we’ll go into in another post.

Since chromosomes recombine when eggs and sperm are formed, and since each child only receives about 50% of each parents’ DNA, all descendants from two individuals except identical twins will have at least slightly different DNA. The more distant a common ancestor is, the more recombination events that have occurred, and so the less DNA shared. 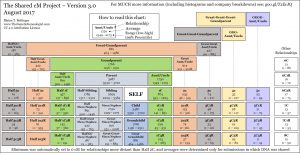 One of the best authors you can read for more information is Blaine Bettinger. He recently updated his estimates of atDNA inheritance according to relationship.

First, it is handy to be able to wade through the jungle of cousin relationships. His updated charts provide a good start. This colour chart shows relationships, with under the relationship both and average and a range of shared cM’s that can be expected. 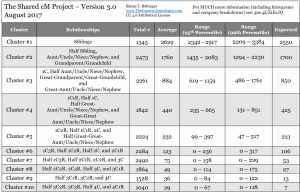 Digging a bit deeper, in the chart at left we can see that most – but not everyone – will fall into these ranges since the ranges and averages are based upon a large but still limited sample. Within that sample, the range will depend upon where the cut-off is placed. The chart at far right shows where the cut-offs for the ranges lie using 95% and 99% or roughly 2 and (a bit less than) 3 standard deviations from the average. 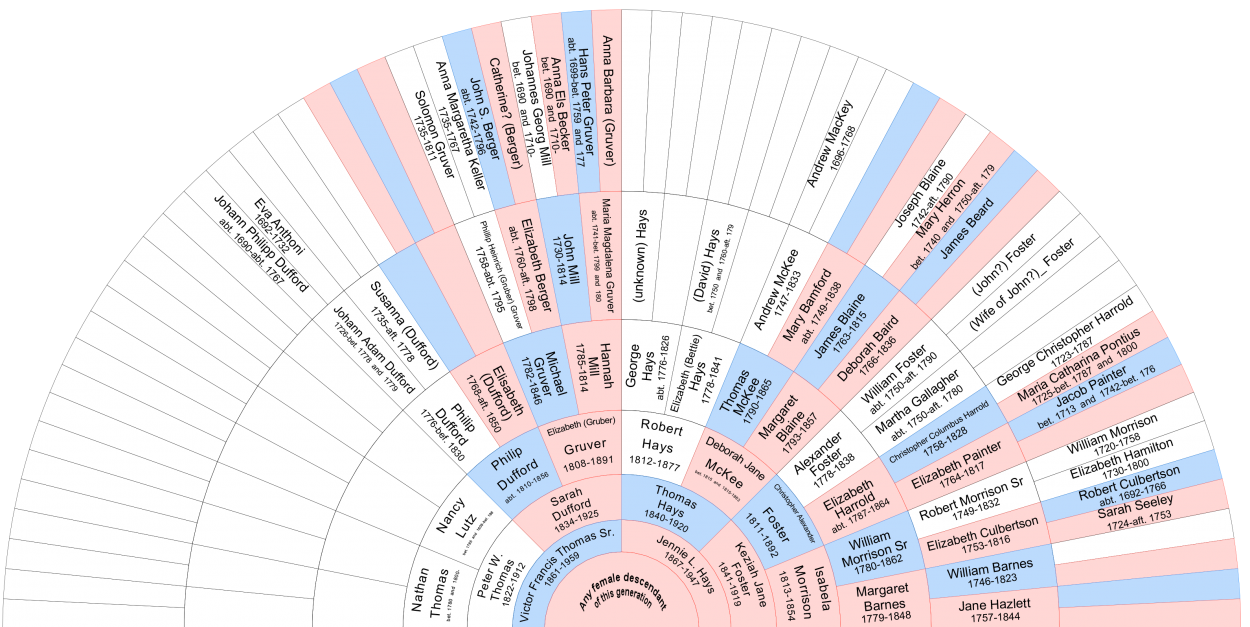 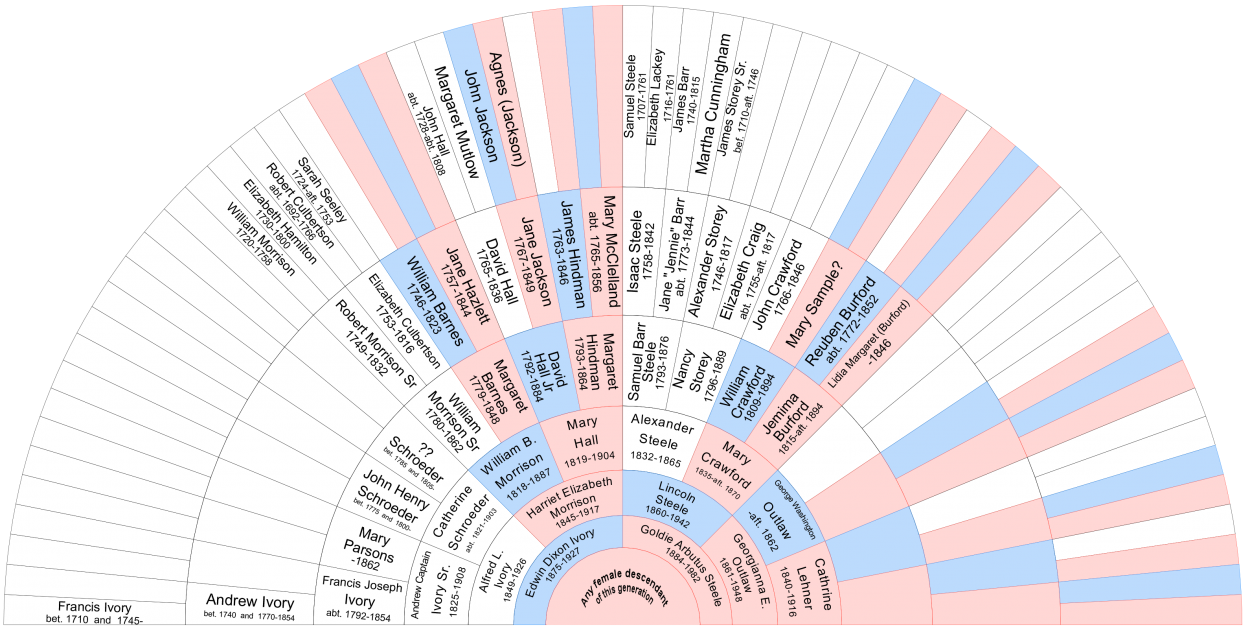 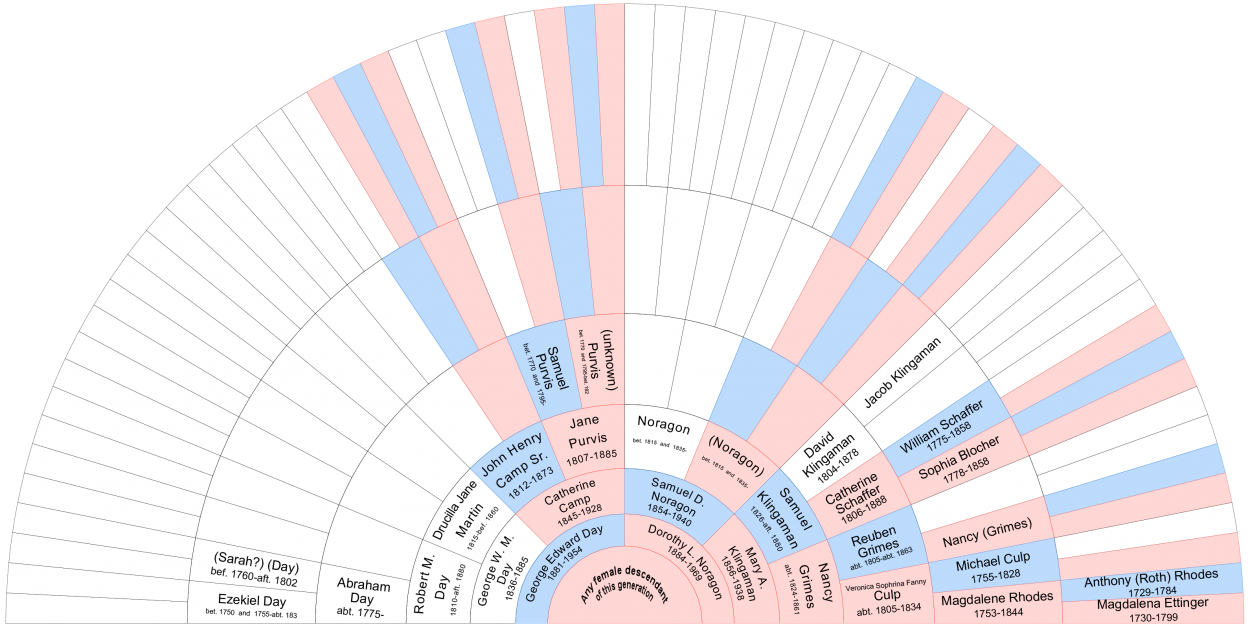 To make things more interesting, siblings generally inherit different segments of X-chromosome from their mothers, and in the case that the mother passes an unrecombined copy of her father’s X to one sibling and an unrecombined copy of her mother’s to another sibling, the siblings will not show an X match. Research seems to indicate that this occurs more often than we’d expect and in fact, we appear to have an example in our own family. When the siblings do show a normal match on the other chromosomes, we can still be sure of their relationship. If not…  well, surprises do happen, perhaps in earlier generations (not often, don’t worry!), so if you’re not prepared for this eventuality, you probably shouldn’t test.

X matches are not always what they seem

This process repeats with every generation, so that as distance increases, it becomes more difficult to localise the common ancestor unless there is a family tree to help. Since men pass an unrecombined X, larger segments can survive for more generations. In addition, some communities in the past have been very close-knit with many cousin marriages, often referred to as endogamous populations. These populations share a relatively small gene pool. This can produce hundreds of apparently close X and atDNA matches which in fact are more distant matches if traced through documented trees. Examples in our family are those who migrated through the Palatinate, whether originally of French or German origin.

At the end of the day though, it is still the case that at 6 generations removed, a man with an X match will have only 5 possible matches and a woman 13 instead of the 64 atDNA possibilities!

Have a look at our Matches page for more information on the lines we are researching.